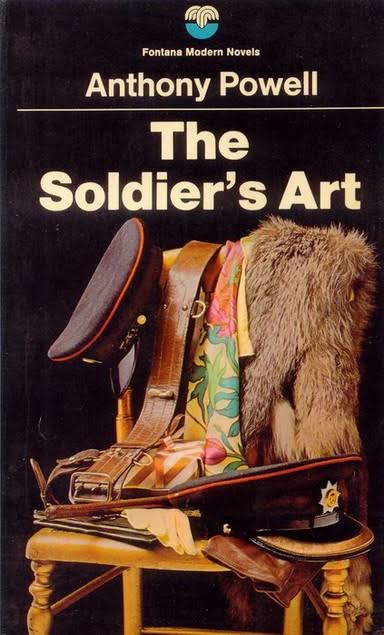 War is cold, loud and brash. It is something that has an effect on everything that bears down living normally. Bombs are dropped. There is no food. There are air raids. Bullets from guns fly through the air. There are those who are wounded. There are those who get stranded. There are those who lose the loved ones. There is loss, and separation, and struggle, and more struggle, with the war that seems to go on indefinitely and unceasingly from both sides. There are those who have no choice but to fight. And, is it fair fighting? Soldiers are caught between the decisions, and are played like pawns in a big game schemed out in the chaotic and unruly world of political agenda and personal gains. And, the civilians are left to struggle, half of them unable to comprehend why things happen the way they happen during wars.

The Soldier's Art is grim, funny, and undoubtedly moving tale of the period of war between June 1940 and June 1941. The novel follows the story and experiences of Nicholas Jenkins, Major Widmerpool, Chips Lovell, Major Finn, Charles Stringham, and several others. Set in the time where Germany is already deep into the war with France, and Hitler was establishing his power, the novel focuses on the deadly side of silence during war. The novel focuses on the life of a soldier as he waits for orders, and for instructions that ship them off to a far corner in the world to fight in unknown lands. It talks and projects heavily the numbness they face as they go through a war, sometimes irreparably broken somewhere inside them. It takes on the heavy dependence of soldiers on intoxication and alcoholism, and how they use it for an escape. The novel brings before our eyes the painful stabs of unexpected sorrow, grief and separation.

In the last conversation that Jenkins has with Stringham, moments before Stringham dies in the bombing of his building, Stringham reads out a stanza from a poem that captures everything of the novel.

I shut my eyes and turn’d them on my heart.
As a man calls for wine before he fights,
I ask’d one draught of earlier, happier sights,
Ere fitly I could hope to play my part.
Think first, fight afterwards-the soldier’s art:
One taste of the old time sets all to rights.

And, the last line foreshadows the death of Stringham, after having a conversation with Jenkins: "one taste of the old times". And, it also signifies "The Soldier's Art", which is also where the title of the novel comes from, to fight for the nation and die valiantly, and play their part.

I had this book lying around in my house, so I picked it up and read it. And, later found that it is the eighth of Powell's masterpiece of 12 brilliant novel-sequence: The Dance to the Music of Time. This was brilliant, and I may have lost out on references from the previous volumes. But, I hope to read them all, and regale in Powell's absolutely smooth writing.

If there's one phrase that could express my feelings after reading it- absolutely brilliant!
Posted by Sandhya Varadharajan at 10:55 PM