Why I Did Not Get My Hogwarts Letter 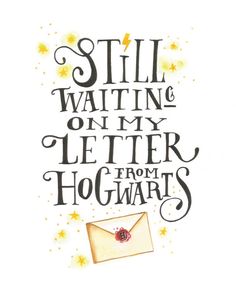 I was introduced to Harry Potter, and the world of wizards and witches when I was eleven. And ever since, I’ve always waited for my Hogwarts letter- most sincerely. People thought it was fiction but I knew it wasn’t just that. What I couldn’t understand though was why I did not receive my Hogwarts letter. Years on end, I peeped through the window to see if I could spot an owl approaching. No such luck.

Now, while pursuing B. Sc., LL. B., I finally found a convincingly probable answer to the question that has bothered me for the last seven years.

This semester we have a paper on Microbiology and Genetics. And, today, while winding up with the genetics topic, our professor showed us a video by National Human Genome Research Institute- Harry Potter and the Genetics of Wizarding.

Thanks to Prof. Eric P. Spana's wonderful lecture in the video, I got the reason why I might not be the one. For all those out there wondering why you didn’t get your letter- read this! The answer lies in your genes.

Let’s look at it this way: Why does Hermione Granger get the letter, but not us?
Brief answer: de novo mutations.

So, how did Hermione, who was supposed to have only MM genes and be a muggle, become a witch?

De novo mutations are mutations that occur in an egg or sperm cell before fertilization or immediately after fertilization. ‘De novo’ literally means ‘of new’ in latin and refers to such new mutations. De novo mutations may explain genetic disorders in which an affected child has a mutation in every cell in the body but the parents do not, and there is no family history of the disorder. Thus, even if there is no hereditary history whatsoever of magic use, the offspring can have a mutated gene affecting it, thus making the progeny magical.

Hence, Hermione got through to Hogwarts thanks to the mutation in her genes. This answers why she’s a mudblood.

But why not us too?

Well, de novo mutations occur at a frequency of ~77 per generation but only one of them occurs in a gene. So, analysing the past year students of Hogwarts we find just one person who is a mudblood in a given year. So for a wizarding or magical trait the frequency of de novo mutation in that gene is approximately 1 in 750,000 (considering the population of UK since Hogwarts is in UK).

That is why Hermione is a witch and we aren’t.

To know that our seven years of faith can be broken in one class of genetics with a little help from pure statistics is terrible. I can’t still stop waiting for the letter even after knowing the harsh truth.

And to conclude, and console myself for the rest of my life, I just figured a new argument:
Maybe, my letter was tied to Errol.
Posted by Sandhya Varadharajan at 7:16 PM No comments: