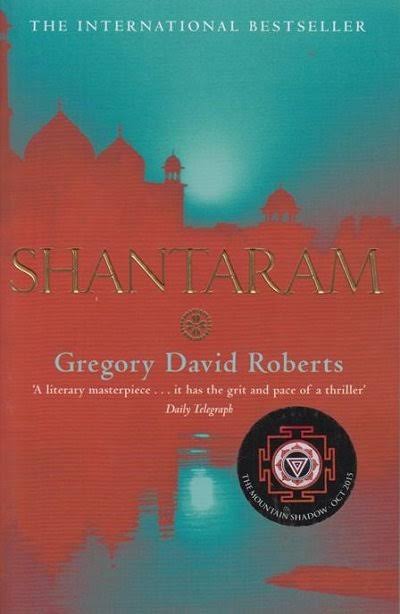 Lindsay, an escape-convict and most-wanted prisoner who escapes the Victoria's Pentridge Prison, arrives at Bombay with a fake, forged passport and the name of Lindsay Ford. What should have been a stopover journey in the city of Mumbai, becomes an extended stay and soon Lindsay finds himself wanting to stay in the city. Lindsay acquaints himself with a local Maharashtrian man named Prabhaker, and hires him to be Lindsay's guide. Lindsay finds a good friend in Prabhaker, and starts settling down with the ways of Mumbai.

On a visit to Prabhaker's native village in Maharashtra, Lindsay gets the opportunity to meet Prabhaker's family. Prabhaker's mother decides to give Lindsay a proper maharashtrian name, and gives him the name of "Shantaram", meaning "Man of God's Peace". On the way back to Mumbai, Lindsay and Prabhaker are robbed, and Lindsay loses all the money that he saved up for a life in Mumbai. This forces Lindsay to push off the better areas, and live in the slums of Mumbai. The day he arrives in the  slums, there is a big fire that destroys most of the properties in the slum. Lindsay sets up a free medical clinic for the people in the slum.

Lindsay soon gets involved with the people of the slum as he gets to gets to know them better. Shantaram, as he proudly identified himself as, gets to fall in love with the culture and people of the Mumbai slums. The story leads on with Lindsay getting involved with the Mumbai underworld and its dons, getting caught in Arthur Road Prison in Mumbai, and also involvement with Afghan mujahideen. Finally, the story ends with Lindsay's realisation that he has turned into everything he hates, and he makes a resolution to live an honest life worthy of the beloved name given to him- "Shantaram".  The book ends on the note of his preparation to leave to Sri Lanka.

The view of Mumbai, its slums, its underworld, its lepers, its charm and its problems are captured through the lens of Lindsay. The book seems to be based highly on Gregory David Roberts' life and personal experiences in Mumbai. The book is a charming overflow of descriptions, and brings the dynamic and fast-paced city of Mumbai before your eyes as you read it. It is a highly self-reflective narrative, and ponders on the lines of the thoughts running inside the brain of a person like Shantaram/Lindsay. But, it is also a fast-paced narrative on the likes of a thriller.

It was an engaging and unputdownable read!
Posted by Sandhya Varadharajan at 7:05 PM