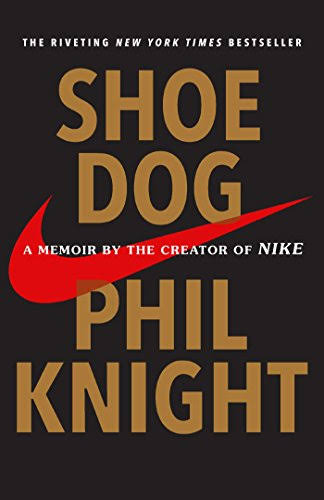 Nike. There couldn't be a more familiar name to all of us. We all know Nike, we all buy Nike, and we all wear Nike. And, we see Nike stores on the street in every city, every country, and every corner of this wide(or, small?) world. But, do you know how Phil Knight began it all?

Phil's ambitious idea started through a seminar paper on entrepreneurship, and he had written a reserach paper about shoes, and the paper had evolved from a run-of-the-mill assignment to an all-out obsession. Now, we shouldn't take those brilliant ideas we actually write for our semesters that lightly, should we? The idea interested him, then inspired him, and then captivated him. What seemed so obvious, so simple was also so potentially huge!

"Being a runner, I knew something about running shoes. Being a business buff, I knew that Japanese cameras had made deep cuts into the camera market, which had once been dominated by Germans. Thus, I argued in my paper that Japanese running shoes might do the same thing."

The professor thought Phil's idea had merit, and gave him an A. But that was that. At least, that was supposed to be that. But, there began the spark through which Nike shines today. Shoe Dog is a brilliant memoir: honest, bare and beautiful. The narrative feels extremely real, and feels grounded to actualities of what would be faced when somebody starts off with an idea. With personal and professional anecdotes and experiences, the book tells you what you need to get up there and get your idea shining.

Phil tells you the importance of a team. Nothing can be done alone just because you have a brilliant idea. One needs the courage to do what very few can and offset his/her own imperfections with a team like Phil's which is obsessively driven, loyal and quirky. That's when the idea blooms. Phil repeatedly stresses on the success of 'his team', and the importance to give credit where it is due. It is important to have faith and embrace their skills.

Why do I keep talking about the honesty of the narrative? The one word that comes to my mind when I reflect on the book is: honest. Phil is not just talking about the life of an entrepreneur, but also that of a human. He has a personal life with a wife, kids, pain, joy, happiness, losses, and everything. You cannot separate that from your professional life looking at a long term perspective. Not everyone can afford to quit everything to work on their idea initially. It is next to impossible. And, that is where the honesty in the book meets out, where juggling the work-life interdependence and balance is beautifully portrayed. The chapters where Phil writes about the financing of the company, especially through the first decade, was just incredible.

What is the take away from the book for all of us? It is something we do know, but tend to forget very easily. In Phil's own words:

This book literally tells you what Nike has been telling you all this while: Just Do It. I think it is a brilliant memoir. It doesn't focus on just the success, and doesn't fill you with the awe and stardom that usually would be expected by big brands to project. It is also very well written, in a way that smoothly pushes you forward from page to page, keeping your interest piqued.

I thoroughly enjoyed the book. And, whether or not you want to know about Nike, and whether are not you are looking forward to know about the life of an entrepreneur, I think this is a book for all to read and learn from.
Posted by Sandhya Varadharajan at 8:07 PM