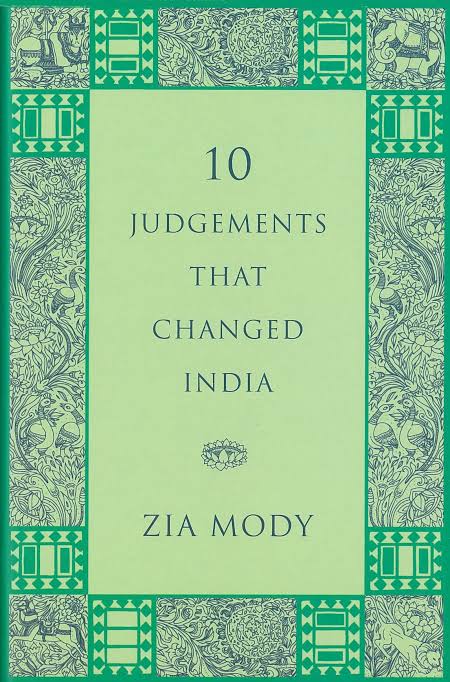 I was presented this book by a relative when I was going to join law school. I read the 10 cases that were discussed in the book before I joined, and it made absolute sense to me as a person who did not really know anything about the Indian law at that time, and I was fascinated. After two semesters of studying Constitutional Law, I picked up this book again and read through the cases, which now I had a strong familiarity to after the course on Constitution of India for a year. And, this time, I truly appreciated the beauty of the book for the purpose it serves. I understood what Zia Mody, in the book itself, meant by saying that the idea of writing a book of this nature was "to seek to bridge the gap between life and law".

Several Hon'ble Justices of the Supreme Court of India have delivered wonderful and courageous, and landmark judgements which serve as the milestone to the rights that we have today. This book discusses 10 such landmark Supreme Court judgements-


These landmark cases cover a variety of fundamental issues discussed by the Supreme Court such as supremacy of Indian Constitution, importance and sanctity of the Preamble to the Constitution, religious fundamentalism, delayed justice and public justice, reservations in India, euthanasia, custodial death, and so on. The Indian Judiciary, whatever downside you pile upon it, still stands to be one of the strongest pillars in the country.

As Soli Sorajbee, former Attorney-General of India and father to Zia Mody, writes in the book's foreword, Zia Mody's analysis of these landmark cases that still have a lasting impact on the law will be useful not only for the legal fraternity, but also the general public that is keen to understand their rights in the legal scenario.

It's a great book, and if you're going to law school in India, do give it a read definitely.
Posted by Sandhya Varadharajan at 7:01 PM