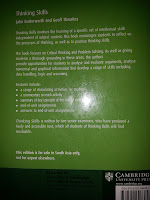 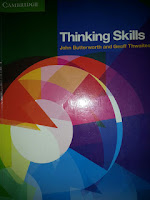 Posted by Sandhya Varadharajan at 6:13 PM No comments:

Title: Postern of Fate
Author: Agatha Christie
Main Characters: Tommy (Thomas Bresford), Tuppence (Prudence Bresford), Mr.Robinson, Mr.Pikeaway, Clarence, Issac, Mrs. Griffin, Mr. Crispin, Miss.Mullins and Hannibal.
Description of one of the main characters: Issac is an old gardener. He works for Mr. & Mrs. Bresford who had come new to the house – The Laurels. He knows so much about the house and its strange secrets. He is murdered by someone as he knew something about ‘Mary Jordan’ and was about to tell the Bresfords.
Whom I like and why: I like Mr.Robinson very much. He is a very kind man. He knows many things about the submarine case and Mary Jordan which happened before 60 years.
Whom I dislike and why: I dislike Miss. Mullins. She is the great niece of the granddaughter of the original criminal doctor who killed Mary Jordan. Miss. Mullins tries to kill Tuppence by adding poison to her drink. But Crispin and Hannibal save Tuppence from Miss. Mullins. Miss. Mullins introduces herself as a gardener, in the first, to Tommy and Tuppence.
Setting/theme of the story: Tommy and Tuppence shift to a new house called the Laurels. They get many books and they settle down in the new house. In one of the books called The Black Arrow, Tuppence finds random underlining. When she writes them out in a paper, she sees a very disturbing message: M-a-r-y  J-o-r-d-a-n  d-i-d  n-o-t  d-i-e  n-a-t-u-r-a-l-l-y. I-t  w-a-s  o-n-e  o-f  u-s. The book belonged to a boy called Alexander Parkinson. They decided to find out more about the girl Mary Jordan though they suspect that the whole thing might be a fun game or trick done by the boy, Alexander Parkinson. Tuppence gathers from her neighbours that a lot of Parkinsons had lived in the Swallow’s Nest – the old name of the Laurels. Mrs. Griffin, one of the oldest ladies says that she remembered a nursery girl who lived amidst the Parkinson family named Mary Jordan. Mrs. Giffrin also says that she knew a boy called Alexander Parkinson who died when he was eleven. Tommy and Tuppence, driven by the idea that there might be some evidence in the house, do a surgery on Mathilde, the wooden horse which was there in the house since the time of the Parkinsons. They also examine Oxford and Cambridge in the KK, a place in the garden. Then suddenly one day, Tuppence finds Issac, their gardened lying dead, coshed in the head, in the garden. The Bresfords figure out that he must have known something about Mary Jordan. After that Tommy and Tuppence start trying to find out the person responsible for Issac’s death. Tommy meets Mr. Robinson and Mr. Pikeaway who help them. One day a woman named Miss. Mullins comes and offers to be the gardener for the Laurels. Hannibal, the dog, does not like Miss. Mullins. Miss. Mullins tries to poison Tuppence but Hannibal tackles her down and Mr. Crispin alias Horsham captures Miss. Mullins. They find her to be guilty of coshing Issac. Mr. Robinson and Mr. Pikeaway explain to Tuppence and Tommy how all these thing are interconnected. Mr. Robinson also gives Hannibal the title ‘Count’ for capturing Miss.Mullins. It all ends happily.
Part I enjoyed the most: I enjoyed the part when Tuppence writes out the random underlining to find the sentence: Mary-Jordan-did-not-die-naturally. It-was-one-of-us.
That’s when the whole thing starts.

Posted by Sandhya Varadharajan at 1:17 PM No comments:

Much Of A Muchness- My Second Novel

Last year I published my first novel Wizile. Thanks to the encouraging words by those who read Wizile, this year, I've written and published my second novel- Much Of A Muchness. This time too, my brother Sanjay has done the illustrations. Please read the novel and share your comments here.