A Slice Of Poetry And Life 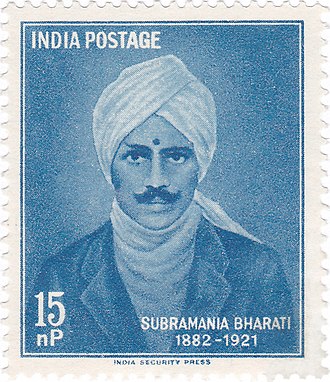 My second language in school was always Tamizh- from class one to ten. Ten years of exposure into the language, and we still used to make so many spelling errors, and read a little slowly, at least most of us. Though hours on end was spent memorizing for my Tamizh exams, the classes and the learning were always fun.

I really enjoyed many of the pieces of poetry that we read through our syllabus in school. Tamizh is a beautiful language, and there have been stalwarts who played with its beauty in the most mesmerizing, meaningful manner. One of my most favourite poems is a poem written by Andagakavi Veeraraghavar which is a standing example of the beauty and richness of the language.

When I was in class nine, we were given an assignment to portray a personality through a recital of something famous they did or any characteristic dialogues by them. I had chosen Bharatiyar, or fondly Bharati, who was also known as 'Mahakavi' for being the torch bearing pioneer of modern Tamil poetry. I recited the poem below for my project. This is one of his most classic, famous poems, and I have attempted to translate the broad meaning for those who do not know Tamizh- though my translation does no justice to the poem.

Scavenging for food and feeding yourself every day, chit-chatting around and gossiping through many stories, getting disappointed and tossing over a plethora of troubles that come on the way, also acting in ways that disappoint others, hairs graying slowly and growing old, dying after a spell of life with much slandering, like so many men who live their lives this way- did you think that I'd fall prey to their ways?

Back in 2004, my father and his friend, both ardent fans of Bharati, were discussing this very poem, and as my father fondly recalls, their friendship "blossomed over this conservation". My dad's friend, Rakesh Vaidyanathan uncle, went back after the conversation only to unleash his strand of creativity- with a simple and yet very beautiful translation of this poem by Bharati that you can read here.

Search in despair for their daily bread,
gossip trivials and rumors spread,
sad in mind and suffer much pain,
inflict suffering on others in vain,
grow old and feeble, wrinkled and grey,
die and dis-appear, as destiny's prey
funny men, so silly and ill,
fall like them, you fancied, I will?

Bharati was a man way ahead of his time- someone bold enough to not change his ways for others, unabashed to talk truth, and a great visionary and reformer. The teacher liked my recital a lot, and I was one of the people who got shortlisted through the class activity to see a live Tamizh stage play. Later on, I went to write a review of it in Tamizh, and also was one of the five winners of the best reviews.

It is a sweet memory. Tamizh teachers in school are some of my favourite! And I will forever remember our fun during Tamizh classes in school!
Posted by Sandhya Varadharajan at 9:06 PM