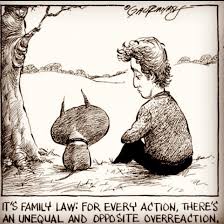 I can write a huge article, or give it to you in one line: the first time I entered a family court, I felt like I was watching a Tamil serial. Melodrama, melodrama, melodrama. Don't mistake me, it is not a joke. The family court is either highly melodramatic or absolutely boring for me, from the few experiences that I have had as a student of law. But, it is a court that has been made specially to handle the families with a highly charged emotional atmosphere. Family Court is a very sensitive place, and is a fully powered emotional zone. This doesn't come across as surprising, because the matters are of a nature that is deeply connected to the individuals and their families involved in the case. Thanks to a litigation internship that I did with working advocates in the Madras High Court, I was sent to the family court on the very second day of my first ever proper legal internship.

The suits and proceedings referred in the above-mentioned section are of the following nature between the parties to the petition:

- a decree of nullity of marriage (declaring the marriage to be null and void) or restitution of conjugal rights, or judicial separation or dissolution of marriage.
- the validity of a marriage or the matrimonial status of the person
- the property of the parties or property of either of them.
- order or injunction in the situation arising out of a marital relationship.
- the declaration as to the legitimacy of any person.
- maintenance.
- guardianship of the person or the custody of, or access to the minor.

Cases in the family court involve subjects of high controversy to which usually there is no one right or wrong that can be pinpointed. It may involve mistakes from either one party or both, and the mistakes may be deliberate or unknowing. And, most of the times, there is a lot of fleeting statements by both parties, especially in cases revolving around marriage, and it is next to impossible to determine whether the party actually means it or whether it was said in an emotional fit.

A good judgment is considered to be neutral, based solely on the facts and evidences available for a case, devoid of bias or emotions overclouding justice. However, cases deal with humans, and when humans are involved it is seldom without at least a tinge of emotion.

The first time I went into the family court, a woman was crying, loudly, and arguing her case for maintenance by herself without allowing her lawyer to talk to the judge. The judge requested the woman several times to calm down and allow her lawyer to speak, but in vain. There were some in the court laughing at the woman, the lawyer was trying to pacify her and get her to allow him to speak, and the judge was getting irritated. I have never ever seen someone cry that loudly until that day, and she was correcting the judge also when he was trying to talk. The whole air was so charged with high drama that I had to get out for a fresh whiff of air. The case was adjourned to after lunch after a full 45 minutes of drama and overreaction by the woman, and I never went back there after lunch.

And, a few other times when I had to go to the family court, I overheard conversations and saw scenes that sometimes came across as way too dramatic. But hey, it is not for nothing they have a separate Family Court! As much as you want to appreciate and not mock the sensitivity, sometimes the sequence of events and conversations at the family court can be too funny to not break into a slight amused smile.

Don't you dare take it further than slight- not unless you want a menacing glare from the judge that can make you hear the words GET OUT without anyone saying it!

I am not a fan of the family court myself. I usually took the first opportunity to exit and visit other courtrooms during my internship. But, if you ever get an opportunity, take a sneak peek into the family court. Not for the drama, but let it teach you the infinite lacunae in the pace of the cases, the inevitable backlogging true to the saying 'justice delayed is justice denied', the huge amount of familial issues that come up every single day, and the sensitivity surrounding it!

I can guarantee you that the high charge atmosphere has very important lessons to teach!
Posted by Sandhya Varadharajan at 9:38 PM