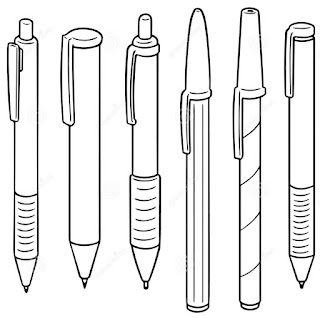 Happiness was at it's best when we were in school. In the final years of my primary schooling, towards the end term of my fifth standard life, there came a life-turning point. It was a significant one- one that would mould my preference and dominate for the rest of my school years, still does in college, and would probably do through the rest of my life. A bunch of ten-year-olds excitedly bid adieu to term two of Class V. When we returned after that short term break of ten days, we were to return as those who were going to take that first step into what seemed like a 'grown-ups' life. In the third term of Class V, we graduated from a pencil to a pen. Yes, a pen.

Our school had a rule that you could use only a gel pen or an ink pen. Ball pens were strictly prohibited until Class VIII. The class was in two factions- those who wrote with their fancy ink pens, and those with the gel pens. Actually, there was a third faction too- the ones that bought only and only Trimax.

Class V was an exciting phase with a full-on pen exploration undertaken by all the kids. My first ink pen was a classic green Camlin ink pen. Well, it pretty soon turned out that it didn't work that well for me. There were hoards of other famous ones like Jumbo and Camel that others used. The ultimate favourite ink pen that, as kids, we went frenzy about was Grippy, an ink pen with a new comic designed body. Out of the 35 in my class, 30 of us had it, whether we liked ink pens or not. It was just a cult necessity. There were those few who showed off their Parkers, and a few others stuck to their Luxor stick pens. But then later, I found that I didn't like ink pens at all much, and then I diverged out to explore gel pen options.

And, then came a phase of Pelicans, Pilot, and Trimax. They were the top of the game. With an amazing flow, and pen caps that somersault, Trimax was an instant favourite for all of us. But the common issue among all of them was that they were expensive. Thirty rupees for a pen, and eighteen rupees for a refill. We found that the ink was gone in a week, for all the notes that we took down. We set out to find cheaper alternatives.

That was the period of the discovery of Snow Gel and Reynolds Racer Gel in our lives. Again, all the Grippys, Trimax, Pelicans were duly replaced by the five-rupee Snow Gel that lasted for over two weeks. True, the caps didn't somersault. But hey, they came in so many colours!

I was always a gel pen girl, but that's only till the end of Class VI. The most rebellious thing we ever did in school was to use a ball pen before Class VIII. Woah, wow, what cool kids, and what a wondrous life! Right? It was fun to sneak in one paper written in all ball, amongst those other papers written in ink and gel! Later, when my brother went through the same phase in school, I was strictly warned by my parents not to teach him such wrong lessons.

To date, I am a ball-pen girl. And I positively love those three/four/five rupee pens. In my opinion, drawn from my extensive experience from experimentation, they work the best! Their flow is just brilliant, they are absolutely cost-effective, and they last for a decently long period. Also, bonus points, they don't break if you drop, they don't ever leak, and you don't feel that guilty if you lose them (though you should, losing is bad), or someone whom you lent it to didn't return it.

As the Snow Gel Queen demands her tribute, I present to you this post- the adventures of happy 10-year olds who decided the faction of pens they belonged to!
Posted by Sandhya Varadharajan at 9:06 PM