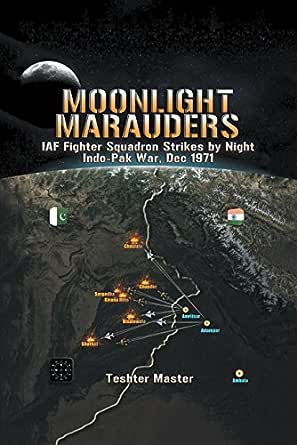 On the first of February, 1971 there came a decisive step that changed the game of the Indo-Pak War that year. For the first ever time, 211 personnel were called to report, each with their own outstanding capabilities, and in the 7 Wing Air Force Station at Adampur, Punjab was formed the Tactics & Combat Development & Training Squadron (TCDTS) of the Indian Air Force. As the book puts it, "the pilots were considered to be the crème de la crème of fighter pilots in the IAF".

A story, as thrilling as it can get, where the newly formed TCDTS is asked at an extremely short notice to perform a task in the 1971 Indo-Pak war. Shrouded in secrecy, the squadron had a small, decisive, and one of the most important war tasks. Set out in moonlight, the Squadron was bound by the duty of a unique contribution during this legendary war between India and Pakistan: "to carry out Low-Level Night Strikes against highly defended and important air bases in the Northern Sector of West Pakistan." And, what better team than the this squadron that was waiting for this rare opportunity of the Air Force to give a solid blow to the enemy!

Describing their raid attacks over moonlight, chapters of the book vividly describe as the fighter pilots fly in the nothingness of the dark night and the little light allowed by the moon, channeling their focus guided by their gut and expertise. Flying the Mig-21s and the Su-7 at such a low altitude for the first time, to successfully escape the radars that capture their movements, the IAF fighter pilots push themselves to train through unending simulations, trying that much harder to be better than the previous ones. It is lovely to read the passion with which the author writes about the aircraft, admiring their beauty "to look and to fly".

The primary source of the book being his personal flying records in log book during the days of the 1971 war, Teshter Master weaves before our eyes a beautifully written, technically detailed, and emotionally sound story that closely follows the activities immediately after the founding of TCDTS, as the squadron trains night in and out striving to be war-worthy, and determined to play the key role of moonlight marauders. Even the crème de la crème fighter pilots are but human. The story is not one adrift of the emotions undergone by the fighter pilots. Master beautifully blends in his worry about his wife Daphne and their two kids, along with the ruthless training that they undergo to make their task in the war a success.

The book has a crying victory of our cheerful, dedicated and spirited squadron, for whom, by that time of the book, you'd already be rooting for. The warmth of success is ended by Teshter Master in the sweet yearnings of his squadron to go home, on a well-deserved and long impending leave from duty.

Towards the end of the book, a note of the reunion of TCDTS, and also a very close and fond word about each member in the reunion by the author makes the book very special. It also has appendices that give you a glimpse from the Squadron diary, a narration of the Engineering Squadron's efforts, and also the milestones in TCDTS from 1971 to 2015. The book also lets you into the awards and glories that the TCDTS received over the years.

Pick up your copy today to journey with the most exciting and spirited squadron that you would come to love by the time you reach the final page!
Posted by Sandhya Varadharajan at 9:27 PM