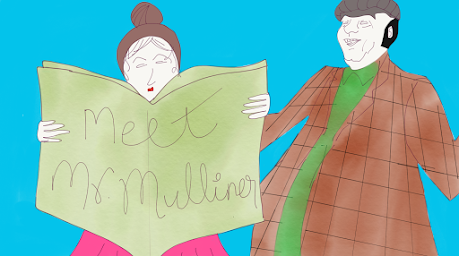 Last Thursday, we met Jeeves and Bertie Wooster. And today, let me introduce you to another classic character of Wodehouse- Mr. Mulliner. This character is one of the most liveliest creations of Wodehouse, and one of my favourites.
Mr. Mulliner is an old man famous in Angler's Rest, a lively pub, who has a story or an anecdote for every situation you talk about (but the stories are almost never about himself). He is an irrepressible storyteller, who brings anyone to rapt attention as his anecdote unfolds, one after another, amusing everyone who listens, including us readers. A raconteur is what they call him, and that is where I first learnt that word. In the Mulliner series, Wodehouse unleashes a riot of forty short stories as the narration of Mr. Mulliner.
The Mulliner stories ran from 1901 to 1910, and for ten years Mr. Mulliner goes on to narrate absolutely amusing stories at Angler's Rest.  When a man announces that his dog won a prize at a cat show, Mr. Mulliner has a story about his nephew Lancelot to show how what is expected never happens. When an American claims that California is perfect, old Mulliner is quick to dole out an anecdote involving his uncle, William Mulliner, experiencing an earthquake and its effects in California. Visiting his nanny reminds him of a story on another nephew Frederick Mulliner. And, even a picture in the weekly paper does not escape from teasing a memory and anecdote of our dear Mulliner, to narrate an entertain an audience!
Most of these short stories feature in the three main books of the Mulliner Series: Meet Mr. Mulliner, Mulliner Speaking, and Mulliner Nights. I have read Meet Mr. Mulliner, and other short stories of Mulliner that featured in Weekend Wodehouse. If I could guarantee a book that could entertain with the most hilarious characters and stories, it'd be one from the Mulliner series! As you read more of those stories, you become comfortably familiar with the regular visitors of  Angler's Rest, with a unique identity- what they drink. If you want me to break it: Mulliner is Hot Scotch and Lemon! All the forty stories of Mulliner are collated in the omnibus titled The World of Mr. Mulliner.
I think the best part of these stories is their narrative pattern- with an incident or a situation in the pub that triggers the irrepressible Mr. Mulliner to tell a story that it reminds of, and then the story unfolds! The Mulliner series is one of the short ones of Wodehouse, but undeniably fond to the readers. The improbable stories entertainingly narrated by the raconteur involving an unending list of uncles, aunts, nephews, nieces, and other acquaintances are such a charm!
Most people know and get introduced to Wodehouse through Jeeves. But, there is much more to Wodehouse than just Jeeves, and Mr. Mulliner tops this list. I'd say try one story, or one chapter in one of the Mulliner series- you'd be left wanting more before you finish reading it!
Posted by Sandhya Varadharajan at 9:41 PM