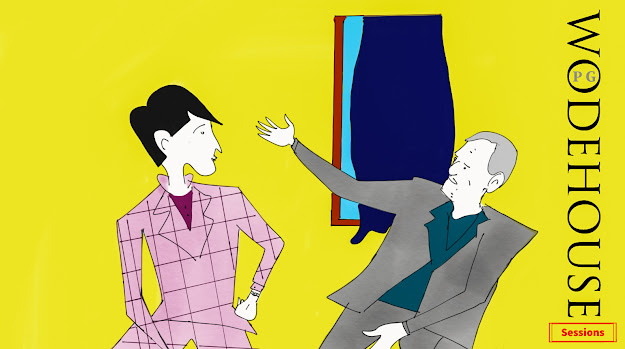 I am sure most of you know Wodehouse, even if you haven't read Wodehouse. But, for those who don't know: Sir Pelham Grenville Wodehouse was an English author, humorist, the fondest satirist of the foppish upper class in the English society, and one of the greatest comic writers ever. With over seventy books and plays to his name, Wodehouse is one of the most cherished and buoyant contributors in the expanse of humorist literature.
Have I read all his works? Nope, and I really hope I do. But, when I sat to count how many Wodehouse books I have actually read, the number did make me smile. I had read all 6 books from his school series, 6 from Blandings Castle, 9 of Jeeves, Meet Mr. Mulliner, and Ukridge- making it a good 23 books across all of his popular series! And, out of 23, hardly 8 of them had a review on my blog. So, I decided to do a series of 6 posts, or what we could call #WodehouseSeries, featuring twice a week on Mondays and Thursdays.
Today's illustration by me is a mix of inspiration from two things- the cover illustration styles of the Penguin editions of the Wodehouse novels by David Hitch, and an original photo of my dad and my grandfather's uncle discussing Wodehouse. The grand old man, my grandfather's uncle, was a big admirer and great fan of Wodehouse. He even had a beautiful collection that had some first edition novels. He never failed to entertain us with a narration of scenes and snippets from across Wodehouse stories! So, when I wanted to create a cover illustration for this series of posts, the first thing I could think of was to make an illustration in the style of Wodehouse book covers for that photograph.
Each post in the series will carry an illustration by me, as we discuss and dive into the fair share of Wodehouse that I have read. So, if you are a Wodehouse fan- I am sure you will enjoy the ride. And, if you have never read Wodehouse, you'll probably pick one up by the end of this series! These 6 posts will delve into Wodehouse's books and characters in his series with Jeeves, school stories, Blandings Castle, Psmith, Mr. Mulliner, and Ukridge- in that order.
I am very, very excited about this, and I hope we can enjoy Wodehouse together in the next couple of weeks! Stay tuned!
Posted by Sandhya Varadharajan at 8:54 PM