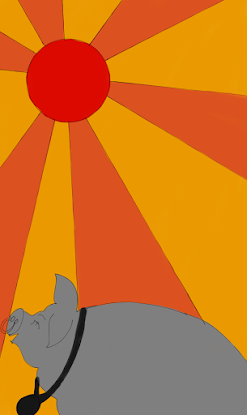 After exploring Jeeves, Mr. Mulliner, and Wodehouse's school stories, we're in for some family drama this week as I introduce you to Lord Emsworth and the Empress of Blandings. Do you want your brain to spin in a web of far-fetched relations and a big, royal family? Go for any book in the Blandings Castle series.
Lord Emsworth is the master of Blandings Castle, and his most treasured being on Earth is the Empress of Blandings- a huge Blackshire sow who is known for winning in most categories of the "Fat Pigs" competition in the local agricultural show. Second to the pig, what Lord Emsworth adores happens to be the Castle (his home), his garden, and his pumpkins. And, absorbed entirely by his love for the pig and his pumpkins, Lord Emsworth lives a laid back, relaxed life oblivious to the highly dramatic events that take place in the castle.
Who creates the drama? Well, there is no dearth of that- with Lord Emsworth's ten sisters, a brother, a daughter, two sons, the infinite in-laws, their nieces and nephews- all of them waiting to stir trouble and politics in the Blandings Castle as they come and go to visit old Lord Emsworth.
Apart from the pig, his pumpkins, and the trouble-brewing host of relatives, the Castle is also home for the innumerable staff and servants to live that royal life, some of whom we get to know over several books. Sebastian Beach is the able butler without whom the Castle activities wouldn't last a day. And, as if these people weren't dramatic enough in themselves, the Blandings Castle also regularly hosted several other Lords and Dukes of the other neighbourhoods!
From 1915 till his death in 1977- Wodehouse held on to this all-time-favourite series of Blandings Castle, with his last book, Sunset at Blandings, being incomplete. In that period, Blandings Castle had 11 novels and 9 short shorties written on it by this classic author.

"Sunshine, calling to all right-thinking men to come out and revel in its heartening warmth, poured in at the windows of the great library of Blandings Castle." - Summer Lightning

I have read Summer Lightning, Heavy Weather, Pigs Have Wings, Service With A Smile, and most of the short stories. I love Lord Emsworth, his dramatic family, and the treasured Empress of Blandings. Emsworth is the kind of old man who can charm you till no end with his stroll in the sunshine and his relaxed persona. If you need humour, or drama, or both- this series is your one-stop destination for all of it!

So, why don't you make some cool lemonade, settle down in a nice spot of warm sunshine, and pick Pigs Have Wings to a couple of hours of unputdownable entertainment?

Posted by Sandhya Varadharajan at 9:45 PM