The Importance Of Being Earnest 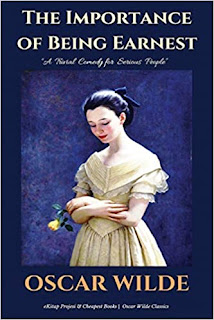 Title: The Importance of Being Earnest: A Trivial Comedy for Serious People
Author: Oscar Wilde
Algernon Moncleiff goes to welcome his best friend Jack Worthing, alias 'Ernest', who comes all the way from countryside to propose to Gwendolen Fairfax, Algernon's cousin. Algernon gives consent to this proposal of Jack on the condition that he explain the inscription on Jack's cigarette case that says:

"From little Cecily, with her fondest love to her dear Uncle Jack."

Ernest confesses on living a life with two identities- the strict and disciplined guardian of young heiress Cecily Cardew through the name of Jack in the countryside, and as the carefree man Earnest in the city. After this confession, Algernon himself confesses to be living a double life. Gwendolen accepts the proposal of Ernest, and convinces him to rechristen himself as 'Ernest' as the name is a big part of why she loved him. Meanwhile, Gwen's mother Lady Bracknell disapproves of Ernest, and forbids any engagement between Gwen and Ernest.

In the meanwhile, Algernon visits Jack's countryside to meet the young, beautiful heiress Cecily Cardew to whom he had been attracted to when Ernest mentioned. He introduces himself to Cecily as 'Ernest', and Cecily presumes him to be the brother of her guardian 'Jack' Worthing. The two fall in love, and plan to get engaged. Since Cecily loved the name 'Ernest', Algernon decides to scrap off his dual identity and rechristen himself as Ernest.

During this time, Gwendolen decides to run away from Lady Bracknell and come to the countryside to meet Ernest(Jack). She chances upon Cecily, and they both end up claiming that they love 'Ernest'. What ensues is a drama that sends you in fits of laughter, and entertains to ensure a smile is pinned on your face!

This is the first time I am reading a play of Wilde, though I have read his short stories before. I absolutely loved it! With other stories like The Canterville Ghost, one is already familiar the unbeatable humour of Wilde. But, this play is a gem! The fluidity and the spontaneity of the characters that has been captured in the script was mind-blowing. This is a short play, and you can read it in a couple of hours. The interplay of the characters, situations, and their hilarious impersonations left me literally laughing out loud, and enjoying every line of this play!

This is a must- definitely must- read!