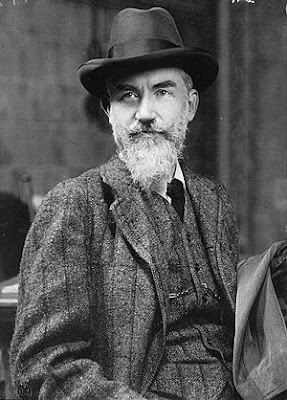 To me, my most favourite playwright will always be George Bernard Shaw. The conversations in the play, the musings, plot line, his unparalleled sense of humour, and the general philosophical trajectories that he takes his plays on- I love them all. A critic so well respected and loved, Shaw is a literary figure who is bound to be etched in the minds for time immemorial.

Shaw was born on 26 July, 1856 at 3, Upper Synge Street, Dublin. He was the third child of George Carr Shaw and his young wife. Bernard Shaw had two sisters. His family was poor. Carr Shaw carried on a business as a retail corn merchant. When Bernard Shaw was 10, he went to his first school called Wesleyan, Connectional school in Dublin.

As a school boy he was a complete failure. Yet he had so much curiosity and would accept nothing he was told without trying to prove the truth of it. For some years, he experimented writing. In the next four years, he wrote five novels, all of which were rejected by every publisher in London. Though he was not a successful novelist the time and energy he spent on his novels was not lost. He made a reputation as a dramatist.

One of his novels Cashel Bryon's Profession became a best seller. Bernard Shaw made his mark all over the literary and creative terrain- as a book critic, art critic, and a musical critic. All his criticism came from sound knowledge. He would not pronounce until he was certain of his facts, and when he did he poked fun in a way which often disguised, except from the most sensitively perceptive, the worth of his most considered judgments.

Shaw rose to be the playwright of over fifty dramatic plays. The popular ones that I have read and enjoyed immensely among the dramatic plays of Shaw are Pygmalion, Man and Superman, Major Barbara, The Doctor's Dilemma, and Overruled. I absolutely love each of these works of Shaw that I have had the chance to read, and I look forward to reading the others! Shaw also has several politically based plays. He was a critic like no other.

He lived up to the great age of 94. Whatever one may think of him, he greatly influenced the development of British political thought in the first half of twentieth century than any other. My first introduction to this brilliant man was through Pygmalion, and I immediately fell in love with the play.

If you have enjoyed any of his work in particular, do share it with all of us in the comments below!

Posted by Sandhya Varadharajan at 9:29 PM