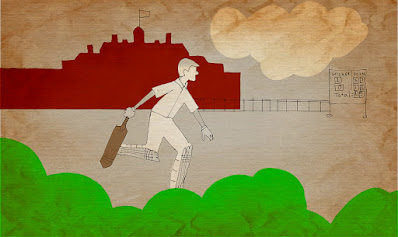 After taking a look at the series of Jeeves and Mr. Mulliner novels in the past week, we go to Wodehouse's school stories, now. For a long time, I went about reading book after book of Wodehouse's Jeeves, Blandings Castle, and Mr. Mulliner, but didn't even know the existence of his series of school stories until the grand old man I mentioned in the introductory post gave me a copy of A Prefect's Uncle.

"Sit down, Lorimer," he said.
There are many ways of inviting a person to seat himself. The genial ‘take a pew’ of one’s equal inspires confidence. The raucous ‘sit down in front’ of the frenzied pit, when you stand up to get a better view of the stage, is not so pleasant. But worst of all is the icy ‘sit down’ of the annoyed headmaster. In his mouth the words take to themselves new and sinister meanings. They seem to accuse you of nameless crimes, and to warn you that anything you may say will be used against you as evidence. -  A Prefect's Uncle

Only introduction was needed, and within no time I was too tempted to have not completed A Prefect's Uncle, The Head of Kay's, The Golden Bat, The Pothunters, and The White Feather. These five books were set in four different schools- Beckford, Eckleton, Wrykin, and St. Austin's. And, these were the early books that Wodehouse wrote for school children before he moved on to Jeeves and other series of novels, and they were published later on from 1901-1905.

The school stories give you the perfect picture of an all-boys, English boarding school. If you have read other English novels for children, you might be able to draw a very similar parallel with books like Tom Brown's Schooldays, which has a similar setting around school boys. Also, cricket is a staple in these books. Some of the best bits in the novels involve scenes of the loyalty that the boys show to their House team, triggering fond memories of our own schooldays.

My favourite of the lot is A Prefect's Uncle, partially because I got introduced to it first! The story involves Gethryn, a Head-prefect in Leicester's House of Beckford, and the tale takes you through the lives of Gethryn and his fellow boys as they wade through school life, ragging, house-fights, misunderstandings- all culminating in a cricket matches that seem more like two houses in war!

All these school stories are short novels that hover over or under a 150-page mark. These are an absolute pleasure to read, and would not take more than a couple of hours! Even if the setting is of an English boarding school for boys, I can guarantee that these books will kindle a warm fireplace of our memories that we can sit back, relax, and relish- with an involuntary laughter and a perpetual smile pinned to the face!

Posted by Sandhya Varadharajan at 9:21 PM