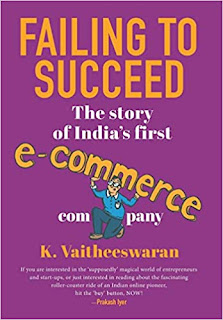 Title: Failing To Succeed: The Story of India's First E-Commerce Company
Author: K. Vaitheeswaran
We all read success stories all the time, but rarely does anyone write the story of a failure. Yet, it is probably in the stories of failure that we can discover what can go wrong, what we should have done or not done, and what are the inherent risks in doing any activity. Business is definitely top on the list. Vaitheeswaran shares a detailed story of his company failing to succeed, which is also the story of India's first e-commerce company.
What started as a fascination for the “brilliant business called e-commerce”, soon led to six entrepreneurs- Vaitheeswaran and his five friends- founding the first e-commerce company of India 'Fabmart' in 1999. As the American company Amazon.com was becoming increasingly popular outside India, India was still very new to the whole world of e-commerce. We were still in a stage when people were getting used to the idea of internet. Fabmart's founders, after a lot of deliberation, decided to stand out from other e-commerce industries of that time, and launched Fabmart with music instead of selling books which companies like Amazon and Rediff were doing.

"In those days, 80 per cent of music sales in India were in cassettes, and only 20 per cent were in CDs. It is a reflection of the enormous changes over the past fifteen years that while India’s first e-commerce site launched with music cassettes, in less than twenty years, music has jumped through cassettes, CDs, iPods and now almost all music is free or streamed."

A big dream needed sound funding, and that was when Reliance opened up to invest in start-ups, and Fabmart was one of them.

“We signed a simple agreement with Reliance Industries and got going with our dreams.”

When all seemed to go well, and the big dreams were getting bigger- everything went topsy-turvy for Fabmart. Fights in the company board that seemed to be too tough to put to rest, and a steady loss and eventual dry up of all funding for the company including the funding by Reliance, pushed India's first e-commerce company to the brink of collapse. Fabmart became Fabmall, and eventually became Indiaplaza- falling lower by every passing year.
As the detailed analysis of all the wrong turns and wrong events are discussed by the author, the book feels like a lesson on the bitter struggles for funding, ever-changing scenarios that surround start-up culture, setting and developing the right metrics, and the importance of the rapport between the founders to ensure they are all equally invested in the company.

"It is very important that co-founders have sufficient stake in the business to keep them motivated, cover for the high risks through significant future upside and to also ensure they have control in running the business."

Vaitheeswaran mainly discusses the two confusing and difficult problems for entrepreneurs: profitability versus profits, and growth versus profits. He says that most companies usually push the idea of profits to the unpredictable future, though they all seem 'operationally profitable' and are slated to 'break even' in the next couple of years. Here's an excerpt that sums up the author's view on this conundrum.

"In several of these start-ups, the founders have sold part of their shares at high valuations and personally profited. This can unfortunately create a situation where a founder is no longer motivated to ensure that the company also profits as soon as possible and thereafter only the investors are concerned about where their investments are going. In extreme cases, the investors are forced to step in and directly take charge of the company affairs as has already happened in some Indian start-ups."

He quotes a popular tamil song "varavu yettana selavu pathana"  to explain profitability vs. profits: where profitability is an idea and profit is a solid metric. He emphasizes throughout on this clarity as an essential for success.

Vaitheeswaran was the pioneer of e-commerce in India. Even more than 10-15 years ago, Fabmart implemented the things we know as normal today- including PIN-based payment gateway, e-wallets, electronic gift certificates, loyalty programmes, cross border gifting, cash on delivery systems, customized merchandise, and a unique business model that combined both offline and online stores.

Many such lessons are discussed in detail, and the book is a rare story of what can lead to failure. There is a treasure hoard of discussions and lessons that we can take away! This is a great read.

Posted by Sandhya Varadharajan at 9:27 PM