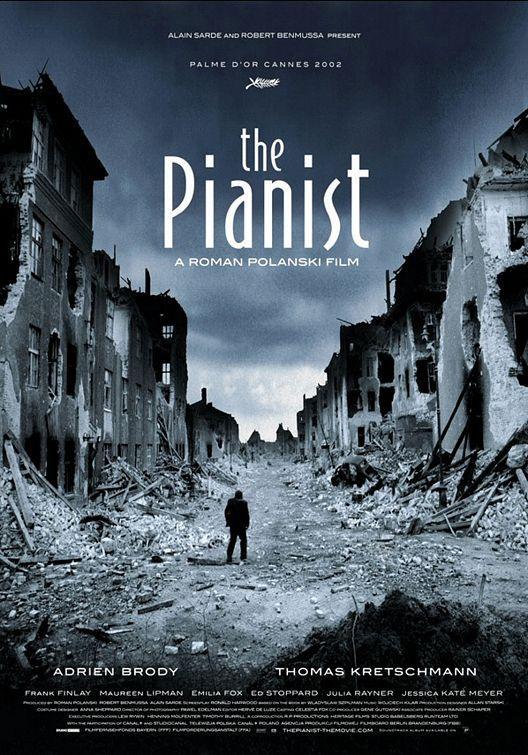 September 1939, when the German Nazis bomb Warsaw, Poland for the first time, a Polish radio station where Władysław Szpilman, the pianist, plays for the radio, is also hit by the bombings. The story progresses slowly inching towards the 1940s as the Nazis get a stronghold on Poland abusing the Polish Jews.

The Szpilman family is forced to disgraceful treatment for being Jews. They quickly descend from being a respectul, prosperous, and peaceful family living in a decent locality to huddling in a "Jewish district" that soon turns into a hungry, desperate Warsaw ghetto, where anyone did anything to survive. As part of Operation Reinhard, Szpilman and his family are packed in an cramped train to the death camp in Treblinka in August 1942. However, a friend in the Jewish Ghetto Police recognizes Władysław, pulls him out of the crowd with the intention of saving him, and separates him from his family to his utter terror.

The Pianist is the heart-wrenching story of the sights of slaughtered Jews, unwavering grip of fear, and the good-hearted help and luck from several non-Jewish friends that Wladyslaw witnesses as he tries to live through the barbaric holocaust, waiting for the Russians, French and the English to put an end to the agony-filled years of World War II. The film tries in no way to make it like a thriller, or make its protagonist the hero. The film doesn't convert the protagonist to lead a revolution. It captures the essence of his fear, the torment, and the dreadful consciousness in the viewer that, without a miracle, not even the fittest survived. And, this is why the film hits you so close.

The film is based on the actual memoir titled The Pianist  by Władysław Szpilman, a Polish-Jewish Holocaust survivor who later settled in Poland and continued to be a pianist and composer.

Brody is unbelievably real on screen as Wladyslaw, with a spectacular performance that convinces you he is the hauntingly sublime personality- the pianist. The movie doesn't cover all of the holocaust, and it doesn't aim to. It focuses only, and only, on our protagonist, what he saw, what he felt, and what he did. There are no tears as you look at Brody as Wladyslaw, only a close feeling of poignant and evocative emotions that settle in your heart, slowly and slowly as you see the pianist go from a positive, optimistic man, to a desperate Jew on the run to save his life.

I loved the film, it is a must-watch!
Posted by Sandhya Varadharajan at 7:56 PM