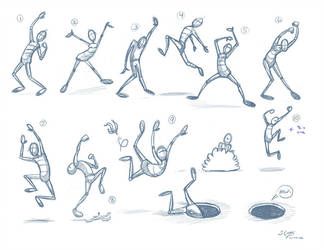 'If you get too excited about something, then it might not happen.'

I have heard this a lot since when I was a kid, and many times it seemed true. You get so excited about something, you definitely want it and you know you'll get it, you are jumping with joy before you even get it- and then, it doesn't happen. You are left with nothing but vehement and unstoppable tears for half a day and a bad mood, that's all. The statement seems true.

Didn't it really happen because of the excitement? I don’t think so. It seems closer to the other popularly quoted phrase in parlance, the Murphy’s law: "Anything that can go wrong will go wrong". What has personal excitement got anything to do with the happening or not happening of a certain event? It’s a phrase that focuses more on the effect of these two factors rather than the direct interlink between the two themselves. Take a look at this 2x2 box:

I think, when people around me told me not to get over excited about something or it wouldn’t happen, they were trying to prepare me to land softly even in a worst case scenario when it mightn't happen. Lesser the expectations and excitement, lesser the disappointment if the result doesn’t turn out what you imagined it would be. Rather, minimize your excitement and try to be open about the result.

An important concept that I learnt over the years is to be excited, but grounded, about the process of doing something, but consciously bringing down the excitement about the result. Excitement and expectations are inherently connected, and the lower they are, the better prepared you’ll be to get what you want!

Endnote: So, shouldn't we be excited? Of course, we should be! Excitement is a great feeling and a very natural one! What we must try to avoid is over-excitement to the point that we can't see the possibility, or ignore the possibility that we see, of something going wrong.
Posted by Sandhya Varadharajan at 9:17 PM

Email ThisBlogThis!Share to TwitterShare to FacebookShare to Pinterest
Labels: DailyChallenge, learning, own, thoughts