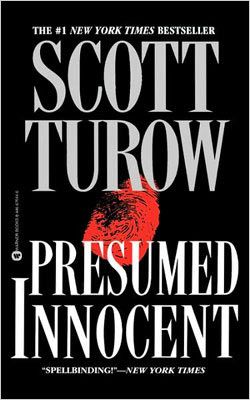 Carolyn Polhemus is dead. Rusty had an affair with Carolyn. Carolyn also had an affair with Horgan. Horgan is Rusty's boss. Rusty is employed under Horgan for the re-election campaign. Rusty is assigned the prosecutor to deal with Carolyn's case. What happens? A tight knot of a solid conflict of interest. Rusty's campaign job with Horgan is on the rocks- he stays in employment if Horgan wins, or gets fired if Horgan loses- and the latter happens. Rusty finds himself not only fired, but also charged with murder by the winner of the elections. His only hope is Alejandro Sandy Stern, an Argentinian lawyer whom he approaches to deal with the case.

Presumed Innocent is a fast-paced court drama, taking us in giddy rounds through the ever-evolving possibilities of Rusty's innocence and guilt, as it plays with the evidences found on record. As Stern battles with Rusty to open up to him, and battles the case in court, we try to find the missing piece along the way to pin one person responsible, to shift the weight of blame on one individual, but in vain.

The book has elaborately drawn out court scenes, and explores the importance of evidence in a case, the presumption of innocence, the honesty of judges, and the state of morality in which the justice delivered is wrapped in.

Presumed Innocent has some of the most brilliant, spellbinding interrogations and cross examinations in the scenes where the case is tried. The courtroom scenes are absolutely enthralling, and keeps you hooked to every sway in the storyline. The other scenes that build up to the court room scenes are also interesting, however I enjoyed the court scenes better.

This is a brilliantly detailed mystery and legal thriller, and Scott Turow keeps you on the tow and engaged till the very end. There are absolutely no spoilers here, and the book has a brilliant finale that puts an end to the question of what happened to Carolyn Polhemus.

With a perfectly clever storyline, and even cleverer scene sequences that neatly present the construct and deconstruct of the central plot- I absolutely loved it!
Posted by Sandhya Varadharajan at 9:35 PM