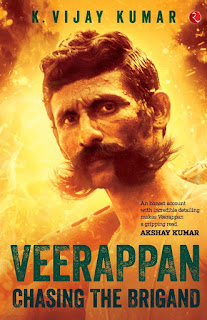 Veerappan is a name too well known to all of us. Being a nomadic brigand who used the Sathyamangalam forests as his turf, Veerappan rose to infamous heights as a Sandalwood smuggler and brigand that every household in the states of Karnataka, Kerala and Tamil Nadu knew about and feared. The brigand was finally done away with in the successful Operation Cocoon of 2004 led by K. Vijay Kumar, IPS and chief of the Tamil Nadu Special Task Force(STF) that was involved for years in tracking and capturing Veerappan. This book is a narration of the true accounts, to the best of his knowledge, that led to the final Operation Cocoon where they managed to trap the infamous bandit.

Vijay Kumar says in the book: "I wanted this book to read like a thriller." And, it was exactly that. Chasing The Brigand narrates the story in a manner so gripping that it is impossible to keep the book down until you get to the end. The incidents that the officers of law, including policemen and forest officials, who were part of the teams that worked for years together attempting to capture and make Veerappan surrender are so enigmatic, dramatic, and command bravery beyond our imagination, that the lines of what we'd think as exaggeration start blurring. The whole book and the events described in the book make you feel like you are watching it all through your own eyes.

The twenty year long fight with Veerappan has been captured in a compulsively absorbing narrative, starting from when the fight began significantly to how K. Vijay Kumar, the author, got involved with the STF to details of all the major attempts to nab the infamous brigand to finally nabbing him in 2004 through Operation Cocoon. Each and every person mentioned in the book aroused a whole another level of respect, awe, and admiration- including the author himself, DGP Walter Devaram, ADG Kumarasamy, Shankar Bidari, DIG Radhakrishnan, Sanjay Arora, Ashok Kumar, Hussain, Rajarajan, Kannan, Shrinivas, Gopal Hosur, Nataraj, and many many more from both the teams in Tamil Nadu and Karnataka.

Through the incidents, there is a revelation of Veerappan, his family, and his gang members, through the encounters that these officials had with them. While reading, I got a rising feeling of how some of Veerappan's actions were similar to the Colombian drug lord Pablo Escobar, and I just had to read a couple of more pages after this thought, when I came across the author drawing a similarity too. Here's the excerpt talking about the conditions that Veerappan put if he were to surrender:

"One of them was that Veerappan be kept in a special camp in Tamil Nadu, where he would receive visitors freely. It reminded me of Colombian drug lord Pablo Escobar, who had got a jail built to his specifications, comprising a soccer field, a bar, a Jacuzzi, his own guards and women of his choice. But Jayalalithaa, then the Leader of the Opposition, blasted Veerappan’s request."

Veerappan also tried to imitate Che Guevara, wearing a beret like him and clad in his standard green outfit. One remarkable thing about him was that he managed to be highly aware of politics, not just of Tamil Nadu and Karnataka, but also all of India and even the world, sitting in a secluded, uninhabited terrain of the dense Sandalwood forests. He had the support of the villages that he frequented through a constant build up of fear, and any attempt by the police to get to him, however secretive it was maintained, managed to get to him as a tip-off.

The read was absolutely thrilling, and I loved it. It brings immense respect to all the officers and the teams of both Karnataka and Tamil Nadu, whose bravery is unparalleled, and a reverence to the many who lost their lives trying to nab him. I loved every chapter, every incident of the book, and the story carried me along with unwavering attention. Every time an officer went in, I found myself hoping they'd nab him. The story has a very fluid narrative, building a whole big picture of 20 long years of struggle through the dots of small, significant incidents which fueled strategies and learning.

Once I began reading, my hands flipped the pages involuntarily and my mind ran along with the story. It's racy, gripping, absorbing, fascinating, scintillating, and it chills you to the bones when you realize it's a true story! I have made sure I don't talk one word about any incident from the story itself, because I strongly feel that the beauty of the read was in the build up that the book achieves. And, that is something that I would hate to spoil for you. I spotted this book yesterday night, started reading out of curiosity, and couldn't put it down till I finished it. The book is a must-read!
Posted by Sandhya Varadharajan at 9:32 PM