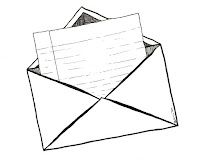 Do you all remember middle school and high school English? We were made to write a bunch of different letters, notices, messages, emails, and make posters, take notes, all under the broad head of ‘writing skills’? I don’t know about the rest of you, but letter writing was my favourite.

Every year, every teacher told me that my letter was different, smart, innovative, and nice. However, what they didn’t know was the crux of what they found interesting in the letter was literally the same every year! Totally unlike a creative writer, Sandhya exercised her creativity in letter writing just once or twice in her whole school life. One idea was just improvised, recycled, and circulated in exam papers across my progressive years in high school. And since each time the correction was done by a different teacher, they always found the idea new and interesting.

My best friend from school laughed at it every single time, and so did I. Once I was praised so much in front of the class, and the teacher asked me to read it aloud to the entire class because she found it very interesting. When I finished reading and came back to my seat, my friend nudged me and whispered in my ear: “Pray the next teacher won’t ask you to read next year.”

Though I flexed my creativity in other forms of writing skills such as story writing and posters, I stuck to this predetermined format that I had for letter writing. It was the exact same peripheral content every letter, with just the core issue changing according to the question asked. I followed the exact same strategy for my letter writing exercises in Tamizh also. As Calvin would put it, I did manipulate the system to nail the letter writing part of the question paper.

Till very recently, I have tried to fix what I wanted to write in a format that has already worked before, just customizing it according to the person I am sending it to. Somehow, this usually works for letters and emails. But, off late, I have learnt to write an email decently without referring to a format. I guess it comes with practice. School has some of my most treasured memories, both big and small ones, that will stay with me forever.

If you have any fun memories of writing letters, do share them in the comments below!
Posted by Sandhya Varadharajan at 9:22 PM