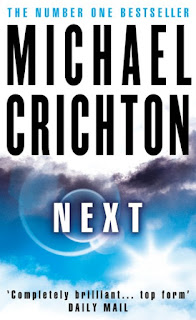 Frank Burnet survives an aggressive form of leukemia after four years of what was called an 'intensive treatment'. However, he learns that the 'treatments' were actually a pretext for extensively studying his miraculous genes which formed the genetic basis for his unbelievably quick recovery from the disease. As he learns that the rights over his cells have been sold to BioGen, a biotechnology startup, there follows a string of suits to claim the rights. Meanwhile, Jack Watson, a relentless venture capitalist, schemes to steal BioGen's cultures of Frank's cells. Situations get out of hand, and Frank and his family is forced on a cross-country spree as they are hunted by different parties for their miraculous genes.

This makes the crux of the story, although there are many other sidelined plots that run parallel to it. The build up of the plot line and the narrative is very engaging, and is guaranteed to keep you hooked to the story.

Crichton spirals you into a mind-blowing world of genetic makeup, it's potential, it's applications, and it's undeniable detriments- both legal and ethical. As he weaves a thrilling story, Crichton brings the perfect blend of the legal, medical, analytical aspects of the world of genes through a mix of fact and fiction. Next is a closely woven story with many parallel chunks of plots and sub-plots, and some of the subplots fail to tie up neatly in the end. However, the book feels like a whole load of interesting bio-genetic information on current research presented in the entertaining form of fiction.

Genetic manipulations can change the way the world runs, and that era has already begun. I had Biotechnology and Genetics as brief subjects during my first and second year in the University. Thanks to my extremely enthusiastic professor for these subjects, there was a lot of discussion and interest in the medical, ethical and legal aspects of genetic study and genetic advancement, and I used to thoroughly enjoy those classes. I could relate to a lot of the discussions we had in our class while reading this book.

I think there is probably no better way to introduce a concept, especially to someone who isn't familiar with it, than through fiction. I think Next uses the wide array of research that is ongoing in today's Genetics to fictitiously show the future. And, at the breakneck speed at which the world sees advancement today, that future is probably not far off!

It's a very interesting read, though the sub-plots are way too many and sometimes the book takes you around for a spin. It's fast paced, and I enjoyed it!
Posted by Sandhya Varadharajan at 8:28 PM