A Perfect World Of Fallacies 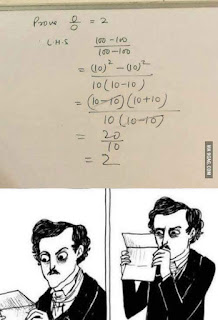 Irrespective of whether you are a math student or not, at some point you'd have encountered a mathematical fallacy in the name of a trick puzzle or a joke. They are intriguing, fun, and absolutely absurd. For those who aren't very familiar with how the word fallacy is used in the context of mathematics, here's a small introduction.

Fallacy technically reflects its meaning in English: "a mistaken belief, especially one based on unsound arguments". In mathematical terms, you could consider it as an invalid proof, where there is a fundamental error in the very mathematical concept, although it may seem fine on the surface of the process of the proof. The beauty of mathematical fallacies are that they are absolutely absurd, and yet to actually find out where things go wrong, one needs to know the subject in and out.

In some simple, basic mathematical fallacies like proving 1=2 or 0/0=2(using algebra), spotting the goof up might be pretty simple, thanks to our elementary school mathematics. But, the fallacy in the proof of 1=2 using complex numbers might be slightly more subtle and difficult to spot unless you know the subject. Would you like to take a look of these two and have some fun? Try them here!

During school, finding the fallacy in the problem was a favourite thing for some of my friends, and I have had a hilarious time trying along with them! Fallacies are some of the hardest challenges, and they test the core fundamental knowledge of mathematics. Fallacies, especially in geometry, are so mindbogglingly ridiculous and yet so hard to figure out where exactly it goes wrong.

I believe that concepts such as finding fallacies in mathematical problems not only make math so much more fun, but also teaches us the real basics, or the sine qua non properties of this subject. If you're interested, do check it out. I can assure you that it's a ton of fun!

We are all good at finding faults (with literally every single thing and every single person)! Why not try your hand at this?
Posted by Sandhya Varadharajan at 9:19 PM