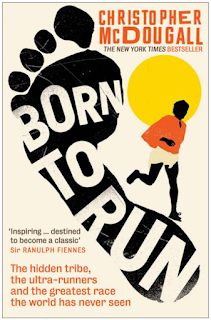 Title: Born to Run: A Hidden Tribe, Superathletes, and the Greatest Race the World Has Never Seen
Author: Christopher McDougall

Why are we not able to run long distances with speed without regular injuries? Why does our feet pain? And, how do the Tarahumara Indian tribe, snuggled safely in the recluse of the savage Copper Canyons in Mexico, manage to be long distance runners at amazing speeds without even having any of the regular injuries? What starts as a quest with this simple question and thought, leads Christopher McDougall to explore the lives and the ethnicity of this soft and passionate tribe nestled away from the rest of the world.

"How come my foot hurts? Because running is bad for you. Why is running bad for me? Because it makes your foot hurt. But why? Antelope don’t get shin splints. Wolves don’t ice-pack their knees. I doubt that 80 percent of all wild mustangs are annually disabled with impact injuries."

After an impact injury and painful running experience, McDougall sought answers for his questions. And, the only ones who knew the answers—the only ones who lived the answers—weren’t talking. Especially, not to him. Seeing the Tarahumara tribe for the first time in an article, he thinks the image is of "some kind of wishful Atlantean legend about an extinct empire of enlightened super-beings", only to realize later that all that he thought was true- except for wishful and extinct.

"I felt as if I’d discovered the Future of American Running, living five hundred years in the past."

The Tarahumara Indians called themselves Rarámuri, which means 'the running people' in their language. We sprint through the events in the book, swiftly yet steadily, just like the run of the Rarámuri- as we meet them one by one, their kids and the society, and their unbelievable running culture. With a brief insight into the history of ultra-running or long disatance running, and the science behind it, McDougall paints the contrast picture of the same idea in the mind of an urban and the Tarahumara tribe. Not only was the tribe full of ultra-runners and superatheletes, the author finds himself facing a tribe with a great immunity and endurance.

Born to Run is a wonderful book, and I could feel Marcelino and the kids whizz past me as I witnessed their rarájipari, or their famed running races, through McDougall's vivid and fast-paced description. Exploring the contrasting aspects of Science from the Harvard lab tests and pro-running shoes, to these rocky pathways where the Rarámuri ran in thin sandals, the author brings up wonderful questions and seeks answers for them in this hidden tribe.

"His feet were jitterbugging like crazy between the rocks, but everything above his legs was tranquil, almost immobile. Seeing him from the waist up, you’d think he was gliding along on skates. With his chin high and his black hair streaming off his forehead, he looked as if he’d burst straight out of the Steve Prefontaine poster on the bedroom wall of every high school track star in America."

We are allowed a tiny insight into this warm and happy tribe to whom running comes second nature, and we learn how and why they run the way they do. The author also narrates how the Tarahumara-style of running helped him become a much better athlete, and how he gained endurance and reduced injuries while running.

This was such a pleasurable and highly enjoyable read. I loved the narrative format in which the story took me through, and I loved all the characters and the people of this book. It gives a gleeful glimpse into a vibrant tribe of born ultra-runners, and highlights the learning that we must take from them. Also, it just amps you up so much when you read about the tribe and their running, it motivates you and makes you realize that running is one of the most natural things that we can do!

I really enjoyed the book. It has been one of my best reads this year!
Posted by Sandhya Varadharajan at 9:22 PM