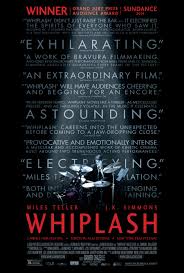 Whiplash. How it left me feeling, as the credits rolled in the end, can be accurately summed up in just two words: absolutely exhilarated.


Terence Fletcher is a jazz instructor and Andrew Neiman is a young, ambitious jazz drummer. The tension between Terence Fletcher's undying urge to push people's limits and Andrew Neiman's daunting attitude, that involves both condescending arrogance and impeccable confidence, to prove he is capable of taking Fletcher's push and much more, makes the crux of the movie.

In truth, there's nothing pleasant about most of the scenes in the movie. I feel the scenes can be best described as raw. Neiman's drive to become 'one of the greats', and seeing him being extremely unforgiving and hard on himself to try and earn credit from Fletcher, would leave you wondering how much farther one could go to prove oneself. Fletcher's brash tone stays intact throughout the movie. And, the clash of these two minds just seems like a bloody warfare.

Even scenes that by normal circumstances one would consider as exaggerated (like when Andrew meets with a car accident but still drags himself to stage all bloody and hurt to perform in a show where he has "earned his part", or the general excessive abusing of Fletcher) fit in magically well with the movie, and just adds to the rawness that the film oozes with in every shot. Be it the passion-driven jazz drumming, the intensity of Andrew Neiman's insane dedication, or Terence Fletcher's ruthless passion towards perfection, by pushing his students 'beyond what is expected' through his aggressive swearing that both motivates and demoralizes them, not one scene feels overdone, and it ensures that the eyes do not wander.

The music track is great. It has a gravity that can hold the attention, even of those illiterate to jazz or western music (like me). The music is one of the primary expressions in the film, and it contributes to the story as much, if not more, as the script and acting, to the varying emotions in the film. The actors have clearly done justice to the script and the tone of the film. Every main and side role has displayed the passion that the story-line commands. The director's slight and just-about-adequate focus on Andrew's love interest, and the relationship he shares with his father, gives the movie that essential tinge of the lesson of empathy without diluting the passion.

Overall, the movie was an intense display of powerful feelings that guide the way to success. It held my focus till the last individual beat of the drum, after which it let me sit still for a while, exhilarated.
Posted by Sandhya Varadharajan at 8:41 AM