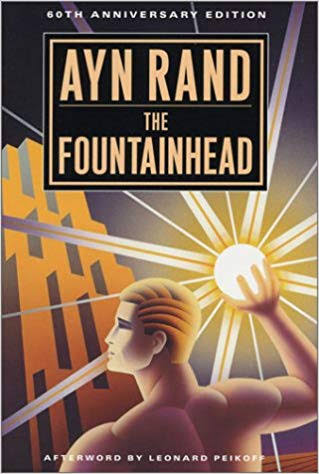 The story begins with a brilliant and naturally-talented Howard Roark, the protagonist, being expelled from the architecture department of the Stanton Insitutute of Technology, as he refuses to conform to the classical and historical styles of the subject, and finds the need to constantly innovate. He goes to New York and works for Henry Cameron, an architect who tried to be individualistic in perspective but failed due to the public backlash. Together, Cameron and Roark make some buildings using their innovation, but it does not pay them much.

Meanwhile, Peter Keating, Roark’s flatmate and fellow-student from the architecture department, graduates with a the top rank and joins the prestigious firm of Francon & Heyer. By establishing a great rapport with Guy Francon, he creates himself an edge over all the other colleagues. When Heyer dies, Francon invites Peter to take Heyer’s place. After the death of Cameron, Peter hires Roark to work under him, but Guy Francon soon fires Roark for not conforming to classical styles. Roark moves out to start his own company but is forced to shut it down when it does not receive any commissions. Roark joins work in Guy Francon’s quarry where he meets Dominique Francon, the daughter of Guy Francon. They are attracted to each other, but Howard moves back to New York soon in search of work from the money he made in the quarry.


Ellsworth Toohey, a talented architecture critic and a socialist, sets out to make Roark pay for his idealistic ideas. Toohey, in the name of socialism and collectivism, seeks to control the minds of people and reign power over them. Toohey sets out to destroy Roark’s image and reputation in social standing. He influences a wealthy man who wants to build a ‘Temple of Human Spirit’ to hire Roark for the same. Roark, in his idealistic structure, does not conform to any historical rule and also makes a nude statue modelled on Dominique to be placed in the Temple of Human Spirit, to everyody’s shock. Toohey, persuades the wealthy man to sue Roark for malpractice. Roark is shunned by all during the trial for not appreciating and conforming to the architectural practices in society. Dominique supports Roark and defends in his favour, but Roark still loses the case.

Dominique realising that men like Roark are never going to be supported, decides to stick to the general ways of the world, and marries Peter Keating. She does everything for Keating and completely dedicates herself to him. She even goes to the extent of convincing clients not to hire Roark, to support and ensure Keating gets all the attention. Gail Waynand, a tabloid newspaper publisher, is irrevocably in love with Dominique and pays Keating to divorce her. Wanting to build a home for himself and his wife, he employs Roark to build his house. Roark and Wynand become really good friends during the period of construction of the house.

One day, Peter Keating approaches Roark to help him design the construction of Cortlandt, the famed contract that Keating had acquired through influence. Roark agrees to help him on two conditions- anonymity at all costs, and constructing exactly according to his design plan. On agreeing, Roark designs the same for Keating. Wynand and Roark decide to take a long vacation. On returning, Roark finds that Keating could not ensure that his design was executed without tampering, and major changes were being made to Cortlandt’s construction. So, Roark dynamites the entire project to prevent a subversion of his ideal design. Roark is arrested, and his act is condemned by one and all in the society.

Wynand decides to use his newspaper to support his friend, but the tabloid quickly gains a bad reputation for supporting Roark. Toohey, an employee under Wynand, tries to persuade Wynand to run against Roark, but Wynand disagrees. Without Wynand’s approval, Toohey publishes statements defaming Roark, which leads to Wynand firing him, realising the dangerous nature of a man like Toohey. In the pressure of a dwindling tabloid supply, resigning employees and the rejection of his newspaper’s contents by the public, Wynand betrays Roark and publishes a column denouncing Roark, in the hope of regaining public support.

In the trial, Roark gives a speech on ego and integrity, and wins the sympathy of the jury, and thus is found not-guilty. Dominique leaves Wynand to be with Roark, and Wynand realizes his weakness, of how his success depends on the mass, of which he was often warned by Roark. Finally, he closes down his tabloid, and commissions Roark for a final construction project of the Wynand Building. Months later, Roark and Dominique meet on top of the steel construction of the Wynand Building.

All the characters, right from the very beginning reflect the idea by which they stand on. Howard Roark is the individuslistic, ideal man who refuses to partake where there is no innovation, and hates the idea of a subversion of his ideal state. Peter Keating is a comformist, whose decisions are based on the the response to be expected from the society. Ellsworth Toohey, the socialist architecture critic uses the concepts of collectivism for his own political and social agenda. Rand portrays the spirit of Toohey in wanting to destroy Roark as the personification of evil, making him the ultimate antagonist, and the most self-aware villain. Gail Wynand is a man who can appreciate and understand the likes of Roark, his only weakness being that his success depends on the favour of the public. Dominique Francon, the most bizarre and conflicting character in the novel, destroys herself throughout the novel with the idea that non-conformity will never be accepted, but finally settles with Roark, indicating the acceptance in being true to self, as projected by Rand.

All the characters are depicted in the extreme sense of the idea they represent, to paint the picture in line with the philosophy of objectivism as the concept of rational individualism, propagated by Rand.

It was, most definitely, an absorbing read.
Posted by Sandhya Varadharajan at 6:42 PM