The World As I See It 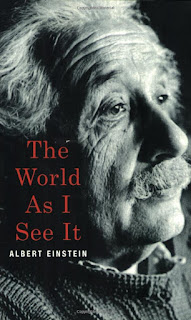 Title: The World As I See It
Author: Albert Einstein
Translated from German to English by: A. Harris

To most of us, we were taught who Einstein was since the time we were taught what science is. But, did we ever really know who Einstein is? We knew Einstein, the universally famous scientist, who was one of the most brilliant of men to have walked this Earth and who talked of things that were way beyond the comprehension of common men. Mark Twain once commented how as a reader and writer, he still could not completely comprehend a single line of Einstein's theories.

But is that all who Einstein really was? Obviously not. And, his own book The World As I See It gives you a glimpse of another, less-spoken side of this man. We meet Einstein, the human and the thinker, through the miscellaneous collections of Einstein's thoughts on a wide array of things from education, war and peace to religion and life. He portrays what he believes as reason itself manifesting in nature, and emphasizes on the importance of experiencing it. And, he calls such an experience of humans as that which:

"... stands at the cradle of true art and true science."

The chapters and the thoughts are what you might call as haphazard, and yet by the time you wrap up this book you get a clear, appealing picture on this brilliant man's view on the world and it's philosophies. It is a small, quick read that should take more than a couple of hours. I obviously read the translated version by A. Harris, since I don't know German. The translation is top notch, and the book will have you so engrossed in the content that you won't even notice it's translated!

"A hundred times every day I remind myself that my inner and outer life are based on the labors of other men, living and dead, and that I must exert myself in order to give in the same measure as I have received and am still receiving."

We take home many lessons- some that we already know in the corner of our mind, and some new. It is just as inspiring and admirable to see Einstein, the thinker, share his perspective. We all admire him, although I wonder if any of us really understand any of his works. So, why not grab this opportunity to understand at least the one book that he did write that works within our ranges of understanding! It's a great read!
Posted by Sandhya Varadharajan at 9:16 PM