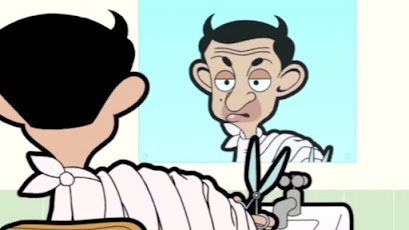 What comes to my mind when I first think about a haircut, especially cutting my own hair? Mr. Bean. Mr. Bean has done it all. And, the confidence I have on myself is the confidence I have on Mr. Bean. Well today, I tried to cut bangs by myself (and it turned out fine), but all I could think of was the two crazy Bean episodes- one from the animated series, and the other where Rowan Atkinson performs.
Have you seen that episode in the animated series of Mr. Bean where he decides to cut his own hair? Well, that was the first thing that came to my mind when I thought about trying to chop my hair. And, that's not exactly a great first thought! The episode is titled The Haircut. Well, you don't know whether this one encourages or discourages you to get an eccentric cut. Because, one it shows how wrong it can go, and two it shows that people actually love wrong styles which seem to be done on purpose!
Do you remember the other episode in the Mr. Bean played by Rowan Atkinson, where he tries to cut other people's hair. In that episode, he cuts the hair of a small boy by tracing the perimeter of an inverted bowl that he places on the boy's head, and chops off the entire pony tail of a man who just wants his split ends trimmed. The episode is called Haircut Bean.
Mr. Bean is the best. This is one show we can never get tired of watching and re-watching. I spent 20 minutes watching those episodes today, and what a laugh! Also, what a scare! Anyway, I successfully trimmed by split ends and also cut my bangs, without Bean-level-experiences.
Miss watching Bean? Has it been years? I have given the links to both the episodes! Have a fun Thursday!
Posted by Sandhya Varadharajan at 9:21 PM