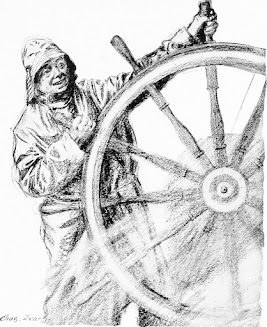 Jim Hawkins is in the company of lunatic seamen, hungry for treasure, and Flint screams at them with a "Fetch me rum; Darby!", and the other sing their screams of:

And, the ten year old me couldn't wait to scream along with the chorus of 'Yo ho ho and a bottle of rum'. Every time I picked the book, I was transported into the world of Hawkins, Flint, Trelawney, Billy Bones, Black Dog, Long John Silver and Ben Gunn. Till date, I remember the exact words with which Flint was tricked to death- an ingenious Ben Gunn mimicking Flint's “Darby M’Graw! Darby M’Graw! Fetch me rum; Darby!”
After a long time, a conversation with a friend today reminded us of all the 'non-detailed prescribed readings' we had in school as part of the curriculum. We've had Treasure Island, Merchant of Venice and other plays of Shakespeare, books of Ruskin Bond, short stories of O. Henry and Oscar Wilde, The Story of My Life by Helen Keller, Silas Marner by Eliot- and I think Treasure Island was our favourite amongst these.
The original title of the book was actually "The Sea Cook" - for Long John Silver, placing him as the main villain and central character of the book. But, later the name was changed to Treasure Island. It has to be said that out of all the villains I have met in the wide range of fiction that I have consumed, Long John Silver is definitely the most charming, witty villain ever.
Who doesn't love a cool pirate story filled with adventure, fights, treasure, an island that looks like a "fat dragon standing up", the sea, some rum, a lot of apple barrels, and an escape plan! Stevenson takes you through a ride that is an unforgettable experience, and would still keep you excited about it, a decade after reading it! Hispaniola and its crew will leave you with a treasure hoard of memories.
If you haven' t read it, please do! You are guaranteed an adventure you'll love every second.
Posted by Sandhya Varadharajan at 9:28 PM