The India They Saw 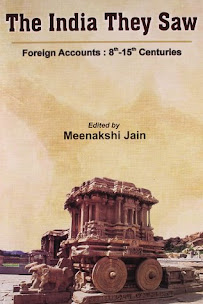 Title: The India They Saw
Author: Sandhya Jain and Meenakshy Jain
The India They Saw is a series of 4 volumes of books by Meenakshy Jain and Sandhya Jain. Volume I talks of the ancient India as seen through the eyes of travellers and foreign visitors to the land, describing everything from the landscape to the kingdoms to the richness in education and culture, including the social practices of the time- all set within the time period between 5th Century BC to the 7th Century AD. Volume II covers the events between 8th-15th centuries, still covering the ancient Indian descriptions and accounts of the Greeks, Romans, Arabs, and the Chinese. Volume III starts with the coming of Vasco da Gama, and covers the European accounts of India in the 16th and 17th centuries. The final and fourth volume covers the accounts of English travellers and missionaries in the 18th and 19th centuries.
I just started this book today, and it is very interesting. The compilations made are very beautiful, truly bringing to you in a chronological order the India they saw. While reading, one can spot the similar accounts, owing to different travellers and writers observing the same kind of practices in the same time period across many parts of the country! The travellers are also unanimous in one more thing- their sheer awe on the high cultural and spiritual progress that they saw in India, unlike any other place.
The India They Saw presents the historical Indian view from a beautiful angle, and it is so well arranged through the four volumes, covering in total from the 5th century BC to the 18th century. Some of these travellers and their accounts take you back to what you read in your Social Sciences during middle school- a fun way to learn history.
I feel this is another book which can be read in small doses and interesting snippets, from which you can learn a lot over a period of time! Do check it out!
Posted by Sandhya Varadharajan at 8:55 PM