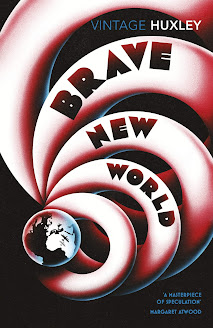 Title: Brave New World
Author: Aldous Huxley
In the year AF(After Ford) 632, which would be an equivalent of the year 2540 in our calendar), men and women are no more born with natural abilities. Instead, in the dystopian World State city of London, kids are genetically engineered in artificial wombs where their abilities are handpicked according to the need to the world. The childhood is one closely monitored and led on the lines of requirement of the different classes they were engineered to belong to- the intelligence class and the labour class, with a clear establishment of hierarchy between the two.
The society no longer has happy citizens, rather undergoes a mandatory feeding of the soma drug by the State to keep it's citizens peaceful. While the State tries to establish this Utopian system, Bernard Marx, a psychologist and sleep-learning specialist, raises his criticisms in his own arrogant, fearless way about the State's wrong methods of ensuring peace and calm. The story is of this one man, an individual, who questions and challenges the wrongness of the need-based, engineered production of humans thrown into a hierarchy based on intelligence, and the advancement in psychology and sleep-learning put to the negative use of manipulating citizens, and many more in that world that seems a nightmare to him.
Is it utopian? Is is dystopian? I think it is the dystopian version of utopia, where men start claiming their 'right to be unhappy'. At the end of the day, where there isn't natural choice or selection, there is a dystopian angle to it- be it happiness or sadness. Huxley gives a mind-blowing science fiction- and the scariest part is it is not really much of a science-fiction anymore. True, it is still an exaggeration from some of the events that happen now, but probably our AF 632 isn't really far off. Take anything, from mood stabilizing pills to genetic modifications and designer babies, Huxley was bang on about literally every development that we have to. And, to have such a foresight, by whatever means, is just plain crazy.
It's a book that feels half-true, and the other half seems like a prediction. It's unputdownable, building the  ultimate dystopia in utopia. It's impossible not to marvel when you read this book. It is not entirely dark, it presents a perfect picture above that is yet to be tainted. Yet, it is all about knowing all the while that you read it- that it is tainted.
It is a masterpiece! I absolutely loved it. It is a must-read!
Posted by Sandhya Varadharajan at 9:21 PM