"We, The People Of India" 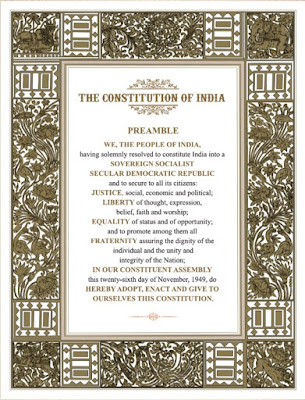 The most significant and beautiful part of our extensive and elaborate Constitution of India is its Preamble. We, the people of India, gave to ourselves a wonderful, forward-thinking, and progressive nation when we imbibed the fundamental traits of being a sovereign, socialist, secular, democratic republic nation that will forever strive to uphold justice, equality and fraternity in our Preamble to the Indian Constitution. And, "we, the people" gave all of this to ourselves, according to the preamble itself. And, are we sure we all know the preamble well?

We, the people, have committed to ideals that we will hold on to as citizens of India. We, the people, still can't be sure that all of us know what the preamble actually says. What a shame! My law school has a huge display of the preamble in our campus, and it is one of the most favourite spots of all in the University. On to one side, there is the library that holds the wisdom beyond, and under the preamble, is a humble space for all to think, act, and imagine freely true to the ideals of liberty and justice enshrined in the Preamble.

The Preamble serves as a guiding light for the Constitution and judges interpret the Constitution in its light. It indicates the sources from where the constitution has come: the people of India. It declares the freedoms which the people of India intended to secure for all citizens, and the basic type of government and polity which is to be established. In another words, preamble as such is widely accepted as the quintessence and spirit of our Constitution, as it embodies the fundamentals as well as the vision and commitment of a newly liberated nation, after its passing through the inevitable birth pangs of national independence from an oppressive and colonial regime.

Such is the importance of our Preamble, and it places upon us a self-assigned duty to uphold India's constitutional values as its citizens. It is also sad truth that most barely know what the Preamble says, and what those words mean in their true spirit. The Preamble is not a legal document for just lawyers to quote, judges to refer, and law students to study. It is, in fact, everything that the Indian nation is, and should be.

Feeling a little doubtful about the Preamble after reading this post? Let's go back, and read it once!
Posted by Sandhya Varadharajan at 11:34 PM