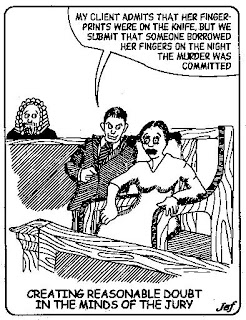 'A hundred criminals may be let free to ensure that no innocent is captured.' Controversial, and you may have other opinions. But, that is what the law is for. As much as there is need to serve justice, there is also the impending need to ensure that only, and ONLY, the guilty is punished. Whether in reality the circumstances match such an ideal or not is doubtful, but the intention of the law itself is honourable, and needs to be looked up to.

Section 101 of the Act is also read with sections 102, 103 and 104 that talk about on whom a burden of proof lies, what is the burden of proof when it comes to a certain fact, etc. All interested can refer a bare act. The construction of the words are simple and clear in the provisions.

Proof must exist "beyond reasonable doubt" to have a successful conviction and pronouncement of guilt of a person. A mere doubt, or a mere possibility of the innocence of the person, can ensure that there isn't a conviction. Why is there such a law? A single, highlighted, everlasting, equity-based principle in law is that a bona fide person must never be put through hardships.

True that the loopholes of the "chance of innocence" will be manipulated by hundreds to escape their guilt. True that it is disheartening to see a criminal walk through open doors using such loopholes. True that justice is not being served to the victim. But, it is also true that this is the only saving chance of an innocent who has been framed by the opponents as guilty.

Evidence Law is a beautiful subject. Not only is it designed to help catch a culprit, but it is also designed in a way to have a saving net to the innocents who fall in the pit of framed and fraudulent litigation. Before we blame the law for letting culprits escape "even when there is enough evidence", we need to understand that they were let go probably because our enough wasn't enough, and there was an inkling chance of possibility of innocence left.

So, when the court is left with a looming question of 'what if the accused in innocent', we have a possibility of justice gone wrong, and that is exactly what the law tries to avoid in good faith. The execution of these laws may be faulty. What isn't, honestly! But, the intentions are all in good faith.

Have you watched the absolutely brilliant crime-drama 12 Angry Men? If not, add it to your list! I haven't come across a better movie with a story line that is exactly the subject matter of this post!
Posted by Sandhya Varadharajan at 11:59 PM