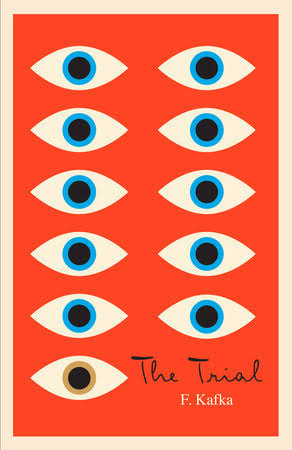 Josef K., a senior bank clerk, on his 30th birthday morning is arrested by two unknown men for an unspecified crime. The arresting agents, however, do not take K. away. Instead, K. is told to await instructions from the Committee of Affairs. Josef K. on his 31st birthday is executed informally by two men in the name of "law" in a place in the outskirts of the city. And, the story follows the life of Josef in the period of a year in between his arrest and death, where K. undergoes a trial so hard on him that is summed up in the final lines of the book.

In an incomplete novel of The Trial, Kafka spins a brilliant satire on the law, and its legal process. Throughout the book, K. maintains his innocence, but is clueless on how to prove it. The whole story exudes a helplessness that the readers are bound to feel along with K. K devotes hours of his time and energy to show his innocence, or to at least find someone to take his case as seriously as he does. At every turn, he is told presenting his case is a formality that will ultimately have no effect on the predetermined outcome, guilt. The helplessness that the book exudes due to K's frantic efforts, is supplemented with a horrifying doubt as to the unspecified crime brought on K's conscience, and the assumption of all that K has no hope. The book is one that will raise unanswered questions.

The parable 'Before the Law' is one of the most famous parts of the book, and as a law student and reader, I had heard of its fame before. But, only when I read it did I truly understand why it is so highly praised. The story leads us to the case of K. whose judgement is determined through accusation rather than the trial.

A dark satire: the story is dreary and sad, but it hits you where it aims to. It isn't an enjoyable read. In fact, it makes you uncomfortable, and leaves you out of focus with so many themes incorporated in the story. It is difficult, oddly horrifying and satirical, but it is brilliant.

I've heard Kafka isn't easy. And, it is true. Neither can you keep off the story, nor can you take it easy. And, through compelling and brilliant writing, Kafka lets you see the aftermath of a disaster born out of unfairness. The book took me through an overwhelming ride, and at the end of it I just sat there for a while, trying to process the ride in silence.

It is a title that is definitely a must-read.
Posted by Sandhya Varadharajan at 11:51 PM