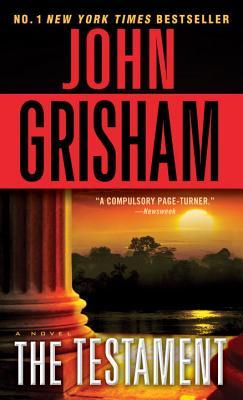 Troy Phelan, a dying, eccentric, self-made billionaire re-writes his will sitting in his plush Virginia office,  determined to not include his six children in his will. His six children, despite being given a gift of five million dollars each on their 21st birthday, turn out to be broke or in debt. So, Troy decides to will off all of his eleven billion dollars to his illegitimate daughter, Rachael Lane, who is a missionary drawn away from money and other material pleasures, and doesn't want old Troy's money. No one knows of Rachael Lane's exact location except that she is somewhere off in the Brazilian forests.

The story is the game played by the greedy Phelan children, their greedier lawyers, the street-smart lawyer of Troy, and Nate O' Riley, a recovering alcoholic, who is sent in search of Rachael. The Testament is a novel that plays on the lines of both an adventure and a legal thriller. Nate O' Riley jumps right into a death-ride, plunging deep into the jungles of the vast Brazilian terrain in search of the missionary daughter, who at all costs must be brought back to keep off the Phelan heirs circling in on the eleven-billion fortune.

I have to say, the best part of this novel is the ending. No spoilers here, so read ahead peacefully! The ending holds a special surprise, turning around the whole novel. The book has a lot of biblical references, and there are too many characters. The novel explored a lot of angles with respect to a testament and its execution.  It is definitely a page-turner.

The Testament can be summed up as an engaging read with the usual money battles that Grisham's stories have, but with a surprise ending.
Posted by Sandhya Varadharajan at 11:44 PM