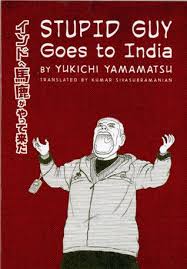 Title: Stupid Guy Goes To India
Author : Yukichi Yamamatsu
Translated By: Kumar Sivasubramanian
Characters: Yukichi Yamamatsu, Surender and Narender
Description of one of the main characters: Yukichi Yamamatsu is a Japanese. He comes to India with an aim to publish a Japanese manga book. He wants to spread Japanese comic culture in India. He tries to sell Samurai Manga on the mean streets of Delhi.
Setting/ theme of the story: Yukichi Yamamatsu, who leaves Japan for the first time, comes to India with an aim to spread Japanese comics culture. He does not have much money, does not know English very much, and has no idea about India. He tries to learn about India before coming but forgets everything he reads. He starts living adjacent to the room of Surender and his family, who becomes Yukichi’s friend. After that Yukichi searches for a translator and finds two students who know Japanese. Somehow Yukichi makes them work and they finish translating the Japanese Manga into Hindi. Then Yukichi goes looking for a publisher and finds one. After editing several times, making many changes, he publishes it like a manga book (bound in the right and has to be read from right to left). He tries to sell the copies of those books in the mean streets of Delhi. But it doesn’t sell a single copy. He thinks that it doesn’t sell because it is bound in the right and has to read from right to left, so he re-publishes it in the Indian style and then tries to sell it. But it still doesn’t sell. He is to return to Japan in a few days and he says,"My dearest wish was fulfilled but I didn’t sell a single copy." He goes back to Japan. He thinks he would know and do better next time he visits India.
Part I enjoyed the most: I enjoyed the part when Yukichi re-publishes his manga book “the Indian way” by binding the book in the left. The way he tries to sell these copies is really funny.

Posted by Sandhya Varadharajan at 9:09 PM