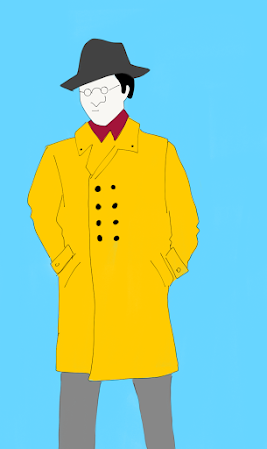 By now, I have introduced you to Jeeves and Wooster, Mr. Mulliner, Lord Emsworth with the Empress of Blandings in the Blandings Castle, and the characters from the school stories of Wodehouse. Finally, we meet Ukridge.
Stanley Featherstonehaugh Ukridge is a very special character from Wodehouse. Before we continue- Ukridge is pronouced this way: U like it rhymes with zoo and kridge like rhymes with fridge- Yoo-krij. He is one of the most handsomest characters of Wodehouse with exceptional good looks, and he stands out in the crowd with his yellow machintosh, grey pants, a towering height over six feet, and a clearly loud voice.
But, what sort of a chap is he?

“Ukridge was the sort of man who asks you to dinner, borrows money from you to pay the bill, and winds up the evening by embroiling you in a fight with a cabman.” - Ukridge

Most of the stories of Ukridge are narrated by Ukridge's friend Corcoran, fondly called Corky. Ukridge is a striking young man often involved plots and schemes to get rich quick. The lengths that he would go to make some money are short of nothing but infinite, except of course to actually work and earn. The hilariously comedic short stories of Ukridge leave you in a fit of laughter as you watch his desperate, comic ways to cash in some capital!

Ukridge is actually Wodehouse's longest-running character although he was only featured in the novel Love Among the Chickens and in ten short-stories in the omnibus Ukridge. I think Ukridge is also one of the most entertaining character ever of Wodehouse, though he is not as famous as Jeeves or Mulliner.

I love Ukridge for the interesting specimen that he is- a seemingly rude fellow to those who are not familiar with his weirdly informal air, a man whose persona is so gripping and charming that people give out credit- only to never get it back again, a man who is all about thinking on how to make money in all ways except the right ones! He is a riot of a character- who'll storm in to the pages and make you laugh, and leave you giggling at his get-quick-money schemes.

You love him, and you are exasperated by him. He seems too charming to ignore, and too difficult to understand. He is one beauty of a character that Wodehouse has ever created.

The best part about the Ukridge stories is that they are short, and give you a full spectacle of a comic tale in less than half an hour. It's the kind of reading that you can do after a busy day, and get back your cheer again!

I say, why don't you try one story today?

Posted by Sandhya Varadharajan at 9:06 PM