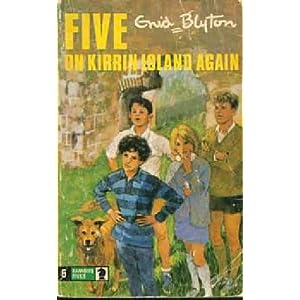 Title : Famous Five (Five On Kirrin Island Again)
Author : Enid Blyton
Main Characters : Anne, Dick, George, Julian, Timmy, Aunt Fanny, Uncle Quentin, Martin and Mr. Curton
Description of one of the main characters : Aunt Fanny is a good-tempered woman. She is George’s mother. She cooks and packs the foods neatly and quickly for the four children and the dog to Picnic.
Whom I like and Why : I like Timmy because he is a brave dog. He is loyal to the children and helpful to George’s father, Uncle Quentin, who is a scientist. He helps the great scientist to make one of his experiments successful.
Whom I dislike and Why : I dislike Mr. Curton as he is wicked and selfish. He treats his son cruelly. He pretends to be friendly but in reality he is not as friendly as he acts. He plans to take away Uncle Quentin’s notes and diagrams so that he could make a huge profit with those papers by selling it.
Setting/Theme of the story : George’s father lives in Kirren Island for the holidays to do one of his experiments. But Curton and two more of his friends try to steal the notes of the experiment and get money by selling it. But Timmy, George, Julian, Dick, Anne, Aunt Fanny and some fishermen stop the thieves. They send the three thieves to the police. The thieves are sent to jail. George saves her island from the thieves.
The Part I enjoyed the most : I enjoyed the part when George finds Timmy and saves him from the dark cave which is closed by a rock.
A different ending : The Kirren Castle gets burnt after Uncle Quentin, George, Timmy, Julian, Dick and Martin comes out. The three thieves die inside the castle. George feels sad. Her own dear castle burns but she soon becomes cheerful. She and her cousins plan to build a tower instead of the castle for the next holidays.

PS: My father thought George is a “he”. I suppose this should make George happy.
Posted by Sandhya Varadharajan at 9:11 PM