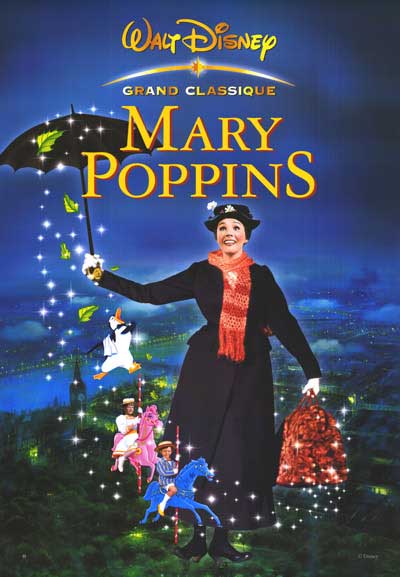 Katie Nanna, the nanny of Jane and Michael, withdraws from her post not being able to tolerate the kids’ tricks on her. Mr. and Mrs. Banks are on the look out for able nannies when Mary Poppins comes to them. Mary Poppins, a fairy answering the children’s call for a kind and sweet nanny, who has rosy cheeks and looks pretty good, gets the vacant post immediately. The kids start loving her from the start. Mary Poppins takes them on adventurous journeys, she being a fairy. Mary, Bert, Jane and Michael have lots of fun.

The father, Mr. Banks, starts getting irritated when the children tell about their adventures with Mary and Bert. He summons Mary Poppins for an “explanation”. But all that Mary says is,” I would like to make something very clear. I never explain things.”

Mary understands that the children want their father to show them his love. So she makes him take them out to the bank he works in. There, Michael wants to feed the birds there by getting them some food from the bird lady for tuppence. But the managers of the bank force the boy and take the tuppence to tell him that he can save it in the bank. But immediately, he and Jane start shouting, “Give me my money.” People in the bank think that the bank is not giving their money back and so, all of them start demanding their money. There is chaos, and the two children run off, grabbing their tuppence. On the streets, when they get lost, they meet their old friend- Bert. He takes them back home.

George Banks is fired from his job. And he realises at that moment how much he loves his children, and the good Mary Poppins has done to his home. He goes back singing, and cheerful, and takes his children out to fly a kite. When nobody notices, and when everything is well, Mary Poppins leaves silently. Bert wishes her goodbye!

I loved the part when the kids go around singing to everybody- "Supercalifragilisticexpialidocious." I also loved the dance of the chimney Sweeps. My favourite character is Bert followed by George Banks, and Winifred Banks. I also love the Admiral, and of course- Mary Poppins!

I simply loved the movie. It was fantastic! I feel it is under the must-watch-without-fail category...

Posted by Sandhya Varadharajan at 7:16 PM