Never Judge A Book- by its Cover, or its Movie 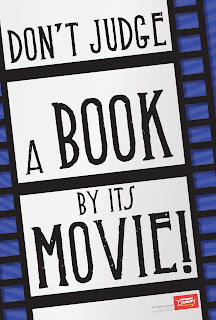 When you read that title, the natural thought would have been that this is a post where a self-declared book lover cribs about her favourite and wholesome books being destroyed to pieces by its high-budgeted movie version, and how people judge the original book based on the crappy movie. Well, I should admit that situations have improved since my school times.

Back when I was in school, I knew people who have sworn to have read Harry Potter several times over, and then talk about the eighth part (well, there are eight movies!) Or, say that they hate Percy Jackson after watching the most horrible translation of the book as a movie. Or, call The Wrinkle in Time as a boring, useless story after watching its sad movie version. Or, watched the Hobbit to claim they actually knew the workings of Middle-Earth! It always broke my heart. I think these were some of the worst movie adaptations ever!

But then, the "don't judge a book by its movie" just because so common (and cliche), that most people have actually stopped judging. In fact, it has brought a kind of acceptance of the fact that had they read the book they might have liked it better. The fact that movies twist the stories and their plot lines to an inexplicable level has been a boon of sorts- people have realized that it is almost impossible to claim to have read a book after watching its movie!

But some movies truly do turn out as good or even better than their books. I think it is best if we evaluate them for themselves, and not judge a book by its movie, or vice versa!

As for not judging a book by its cover, I'd go a step further and say: don't even judge it until you finish reading 1/3rd of the book! Always give it the benefit of doubt if you find the narrative to be slow/boring. But, if it is the content that you have a problem with, then always go by your instincts.

Now, why don't you read A Wrinkle in Time this weekend, and find out for yourself? (I am big fan!)

Posted by Sandhya Varadharajan at 7:58 PM