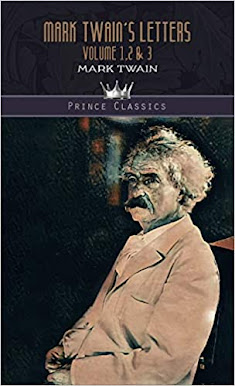 Title: Mark Twain's Letters
Author: Mark Twain
Mark Twain has been one of my most favourite authors since the time I first read The Adventures of Tom Sawyer. It's been around a couple of weeks now that I have been slowly reading and immensely enjoying the letters of Mark Twain. Mark Twain's Letters consist of six volumes, where letters are arranged in chronological order, and they range from snippets of his early letters that couldn't be retrieved in full, to the days of Mark Twain- the traveller, to discussions and reflections on literature and politics, and some of his un-mailed letters. It's not a book you read like others. It's to be taken in doses, every word to be savoured and enjoyed.

"Nowhere is the human being more truly revealed than in his letters."

That is what the foreword began with, and there are no truer words to describe this book. Mark Twain has always had a profound way of capturing mammoth-like concepts in life into words so simple that it leaves you wondering how he managed. He has a style that is so distinct, and so strong that once you read, you cannot escape the lasting impression it will have on you. And, these letters open a portal further into Twain's thoughts and understanding of the the subjective human nature- the vast, un-written life within him.

Six volumes- it'll last me for long years to come, to read them. A letter each day, and keeping Twain with me all along is probably one of the best things. If you are an ardent admirer of Twain, do pick this up if you already haven't!

Posted by Sandhya Varadharajan at 9:44 PM