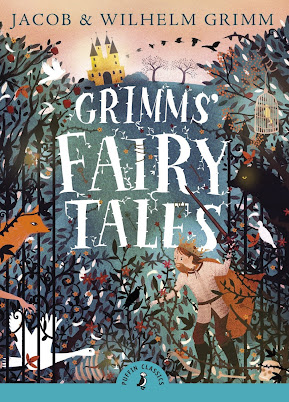 Title: Grimm's Fairy Tales
Author: Jacob Grimm and Wilhelm Grimm
Fairy tales are a constant for kids since very young. Stories like Hansel and Gretel, Little Red Riding Hood, Rapunzel, and Cinderella have multiple versions through the ages and multiple authors who have retold it. These are stories that were told orally from generation to generation, and the German Brothers Grimm compiled a set of over two hundred stories in an attempt to not lose those tales.
I have heard often that the Grimm brothers' tales were originally not intended for children. This always made me wonder why because they were primarily fairy tales of princes, princesses, kings and queens, battles, love, and friendship. But, when I did read Cinderella, I realized that the Grimm brothers' tales were of little more gruesome version than the usual versions, involving a little more violence and bloodshed, which may not be very appropriate for children. The original editions of their tales were known to be even more gruesome in detail, but the subsequent editions have been toned down as it became a favourite among children.
I remember narrating the Little Red Riding Hood as a kid in school. I used to love that story! Even though almost all of those stories have been splendidly recreated by Disney, and for the longest time as children we believed the stories were of Disney's, as we grew up we associated them with Grimm's Fairy Tales. Today, even though we all know that these tales are eons old, and they have only been compiled and given a new form by the Grimm Brothers, the tales are popularly known as the Grimm's Fairy Tales, though none of it is actually theirs! But we have the Brothers Grimm to thank for having all of these splendid folklore even today!
If you are old enough, you should try reading the actual 'Grimm' versions of Cinderella, Snow White, and Rapunzel. They are pretty fun (and a little more gory than the child-proof versions)! Have fun reading!
Posted by Sandhya Varadharajan at 9:57 PM